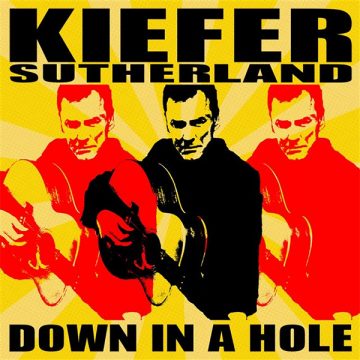 Kiefer Sutherland
Down In A Hole
Warner Bros

If you were wondering what came of Jack Bauer after he finished dismantling terrorist threats for six consecutive days on the critically acclaimed 24, the answer is not what you’d expect. The all-American terror antagonist decided to record a country album (well, maybe that is what you’d expect). Kiefer Sutherland’s fittingly titled Down In A Hole is an unsurprising batch of 11 country ballads, which mumble about the same problems over and over. Considering his Canadian origins, Sutherland’s Americana country rodeo feels unfitting; but then again, any genre of music might feel the same for him. While Sutherland’s vocals are arguably suitable for country, you can’t help but wonder what other elements he has possibly contributed to the project. If you’re guessing the lyrics, though, then you’re probably right.

Generic country guitar arrangements are covered in Sutherland’s surprisingly deep, gritty vocals but are oversaturated in his daft words – choices so laughably generic that it’s almost as if they were stolen from another popular country artist’s garbage pail. If you ever wondered what kind of creations may arise from the collision of Kiefer Sutherland and lyricism, feast your eyes upon the wonderfully bad showmanship on “Truth In Your Eyes” when he confidently sings, “This house is too big and empty, since you been gone, I never though that you’d leave me, now I know I was wrong…Now I need to say I love you, in the words of this song.” Or how about on the lead single, ironically titled, “Not Enough Whiskey,” where the line, “There’s not enough whiskey in the world tonight” begs the question, “then what made you think making music was a good idea?”

As the album goes on, variation is attempted when Sutherland digs deeper in his throat and the guitars and drums follow him. It sounds like what I imagine the opening credits of Sons of Anarchy might be. There’s consistent imagery throughout the album of a burly man riding a motorcycle, or a hose filling up a kiddy pool in front of a trailer park, or the sludgy, grimy stage of an asbestos-infested music venue. Even when the guitar shreds are impressive, like they are in the title track “Down In A Hole” (which I’m not entirely sure isn’t a metaphor for female genitalia), they never exceed the low level of sell-out country music they were intended to be. No track gets as desperate as “My Best Friend” does, though, when Sutherland bellows, “I’ll find a way, to make me, my best friend.” A simple “yikes” encapsulates what I’m trying to convey here.

If you’re a fan of country music, though, you may find redeeming qualities in Sutherland’s tales of self-exploration, even if he merely scratches the surface of existence in the entire ocean of humanity. We can’t expect all music to be mature, I suppose. Down In A Hole definitely belongs where its name suggests (I mean in the garbage, not the innuendo mentioned earlier) but it’s not unlistenable if you are a fan of the genre. As for this critic, “there’s not enough whiskey in the world tonight,” Mr. Sutherland.

Robert Defina is an avid critic both on paper and in person. He spends more time writing album reviews than he does worrying about his future. He hopes that this sort of procrastination never grows old.
RELATED ARTICLES
down in a holekiefer sutherlandwarner bros