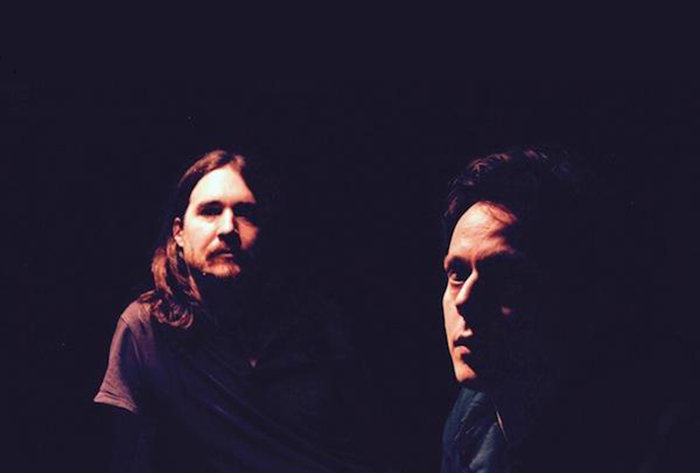 Following the recent release of their EP Kiss That Wealth Goodbye, Belfast duo exmagician are delighted to announce details of their debut album Scan The Blue that will be released on March 25th via Bella Union. Additionally, they’ve debuted new track ‘Job Done’ The song utilizes a blend of field recordings captured in and around the duo’s hometown of Belfast to create hazy garage rock that’s both distorted and distinctive.

A heady mix of guitars meeting synths and spiraling threads of psychedelia, Scan The Blue is the latest musical incarnation of longtime collaborators Danny Todd and James Smith, the songwriter partnership behind Cashier No.9, who released the David Holmes produced album To The Death Of Fun in 2011 to widespread critical acclaim.

Since then the pair have moved on and returned with something novel in the scope of their own repertoire. Self-written and produced with the help of Rocky O’Reilly (And So I Watch You From Afar, General Fiasco, Mojo Fury), their new music leaves behind the Laurel Canyon sheen of Cashier No.9 in favor of something louder, fuzzier and dirtier. Born of a playful attitude, greater confidence and an expansive array of pedals and synths, Danny explains with a smile: “It’s the dirt under the fingernails.”

The musical reinvention is apparent from the very first seconds of opening track ‘Kiss That Wealth Goodbye,’ which steams in with a filthy riff, the product of a guitar and a synth melding together so you can’t tell which is which a feature of the album. “It’s like early Beefheart meets Add N To X,” says Danny – a measure of just how broad the duo’s influences are.

‘Job Done,’ A song about “begging for forgiveness,” is formed from the unlikeliest of sources. “I managed to capture a great clip from a guy playing bagpipes,” says Danny of the field recordings. “We tuned the guitars down to the pitch of the pipes and played around with a couple of chords that sound like they’re sawing and chopping their way through the whole song.”

Elsewhere, the spaced out groove of ‘Place Your Bets’ sees a soaring falsetto echo over shuffling synthesizers, giving way to a widescreen coda and haunting trumpet solo from guest Linley Hamilton.

‘Bend With The Wind’ had a less traditional start. “I was learning to play the spoons around the time of writing this song” Danny remembers. “You can hear me clattering on them at the start. I wanted this song to sound a little bit broken, confused, nervous but at the same time triumphant.”

The broken and the lonely continues with a nod to late-period Pavement at their most graceful in ‘Smile To The Gallery.’ Gentle sway dotted with glistening beads of electric guitar, it nudges towards a heady transcendence that appears later in full, shoegaze glory on title track ‘Scan The Blue,’ a shimmering ambient finale that even took the duo themselves by surprise.

“‘Scan The Blue’ changed drastically at the last minute,” says Danny. “Originally it had galloped along with a Scott Walker type vibe. At the last minute during mixing we accidentally muted some tracks, stood back and our jaws dropped at how beautiful it sounded. A lot of swooning synths and vocals and a silly amount of overdubs. An optimistic sentiment on a grey day.”

Self-written and produced with the help of Rocky O’Reilly (And So I Watch You From Afar, General Fiasco, Mojo Fury), Danny and James’s decision to take the production reins came from their reverential response to songwriting. Each track was carefully crafted over time and only tweaked when they knew they were ready to be heard.

“The song is king,” says James. “It has to be bulletproof before we start fucking about with it at all.”

After so many years of friendship and collaboration, these two songwriter-producers have fallen deeper into the music that binds them more than ever before. And as for subject matter, don’t expect love songs. “Hope, trust and revenge,” says Danny of their inspiration, “they always fall into those three categories.”

SPILL NEWS strives to keep our readers up to date with news and events in the music industry. We keep you informed of the most recent information regarding new releases, tour dates, and information items about your favourite artists.
RELATED ARTICLES
bella unionnews