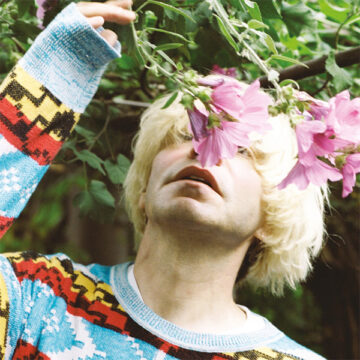 Imaginative music made as an antidote for typical days, Typical Music is the sixth solo album from Tim Burgess, frontman of English band The Charlatans. This one is a double set of 22 progressive indie pop tunes that will vex cynical types with an aversion to homogeneity, major chords, whimsical introspection, and unrelenting optimism.

Yet, Burgess tempers the Timness on Typical Music. He disguises his voice to a menacing effect on the surf-punk “Sooner Than Yesterday.” When he cowboy-caterwauls, “Yeewwwww made an impression on me!” on the Spaghetti Western title track, given the high-speed collision of sounds and percussion, he’s underplaying sentiment. Burgess could have been listening to VR Sex’s recent album or maybe old Dinosaur Jr., breaking character on “A Bloody Nose” to spill some malice. A song about seeing becomes a song about revealing oneself, so thus “When I See You” transcends its deceptively trite premise. The expertly arranged “Tender Hooks” is a supremely modern pop song: synth squigglies, Smiths-y bass, and guitars that sound like horns inject these hooks with swagger. We’d know it was about sex even if the word bed didn’t appear twice.

While Burgess was swinging for the smorgasbord dynamism of The Cure’s Kiss Me Kiss Me Kiss Me double album, he landed a scattered eclecticism more like if The Top had been twice as long–but Robert Smith had the good sense to leave off five tracks. Typical Music’s chaff hides in plain sight on the front half, several otherwise good songs that harbor passages with a K-tel Records/1970s AM radio haze. Common couplets undermine a meat-and-mash winner like “Here Comes the Weekend,” The Doors-meet-XTC-meet-Dylan opener which regrettably does not also meet Abel Tesfaye.

In the “View from Above”, a Pink Floyd oasis, “I am not so good on my own” reads either like a confession or an acknowledgement of his collaborators. The album’s producer, Daniel O’Sullivan, sublimely blends symphonic and rock instrumentation for nouveau disco on “A Quarter to Eight” and Americana melancholy “In May.” The audacious “Curiosity” wonderfully sounds like it’s being played by a supergroup with Atari Teenage Riot, Shonen Knife, and The Muppets in a race to the song’s finish. Pearl Charles’s smart backing vocals smooth without hiding the rough edges and Thighpaulsandra’s spiritualized synth work coils around Typical Music, unifying its ecumenical multiverse. Does Burgess alphabetize his vinyl? His search for an organizing principle is exhilarating.

Charles T. Stokes is a nonprofit resource development coordinator and donor researcher based in Denver, USA. He’s also a tennis player and writer looking to make a racket with his own noises. “There are places in the world where one cannot publicly listen to or perform whatever music they choose without fear of harassment or prosecution. The freedom to write about new music is power, a privilege.”
RELATED ARTICLES
album reviewalbum reviewsbella union
8.0