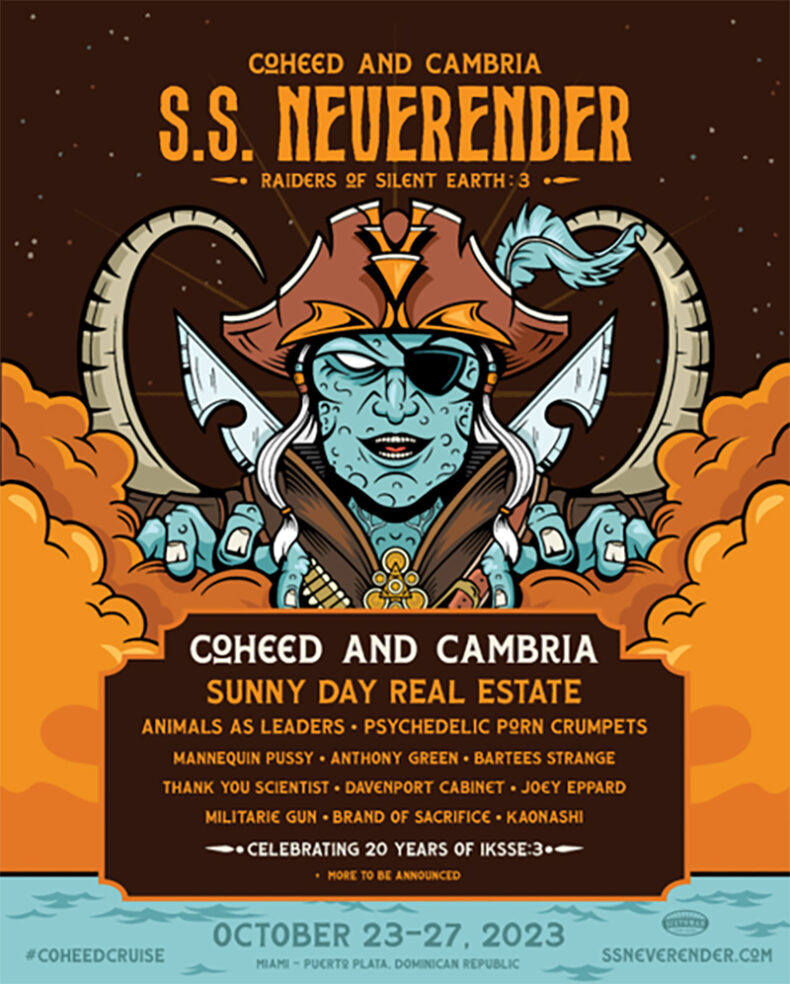 Coheed and Cambria vocalist / guitarist Claudio Sanchez elaborated on the SS Neverender noting, “At first, I was reluctant when the idea was initially presented to us but sharing that time with people that are equally passionate about this bizarre corner of Rock we’ve cultivated has made me a believer that this crazy outfit from nowhere, NY can do anything.”

A music festival mixed with a comic convention, rolled into a vacation, the S.S. Neverender – Raiders of Silent Earth: 3 will set sail October 23 – 27, 2023 from Miami, FL to Puerto Plata, Dominican Republic aboard the Norwegian Pearl. Fans can SIGN UP for the pre-sale by November 14th for the chance to purchase a cabin before bookings are made available to the public. It promises to be a deeply intimate musical experience with immersive theater, meet and greets, cosplay and more – for complete details, please visit www.ssneverender.com.

Coheed and Cambria’s universe has spread far and wide over the last 20 years. In addition to their six top 10 albums on the Billboard charts and numerous hit singles, the band has laid out a sprawling, continuous sci-fi concept called, The Amory Wars, that has sold hundreds of thousands of copies in its comic, prose and illustrated forms. A coffee line, action figures and masks… From exploding out of New York in 2002 with their influential album, The Second Stage Turbine Blade, they have come full circle with their new album, Vaxis II: A Window of the Waking Mind, where the band received vast critical praise, headlined their first arenas and had their first top 10 radio single. Always evolving and ever growing. Now the band can add “hugely successful curated festival / convention at sea” to their resume.

The 2021 inaugural edition sold out in record time in their partner’s Sixthman’s 20-year existence, and proved to be uniquely suited for a band who has highly passionate fans who want to come together in a deeply intimate experience of music and immersive conceptual experiences.

+More to be announced

SPILL NEWS strives to keep our readers up to date with news and events in the music industry. We keep you informed of the most recent information regarding new releases, tour dates, and information items about your favourite artists.
RELATED ARTICLES
anthony greenbartees strangecoheed And cambria