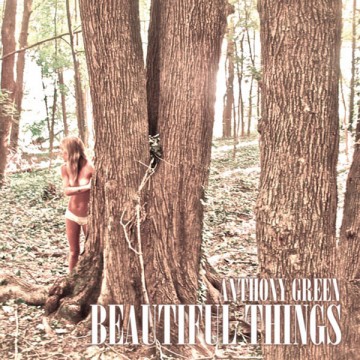 Anthony Green is an honest man – a loving father and husband, and a successful singer-songwriter who has overcome many hardships in his life. All of these characteristics are evident upon one’s first listen of Green’s second solo album, Beautiful Things. Green touches upon personal events through his songwriting, such as his marriage, the birth of his son, and overcoming his problems with medications, making Beautiful Things a positive and sincere tribute to growing up.

Although this album doesn’t resemble anything Green’s previously done with Saosin or Circa Survive, it is not too different stylistically from his first solo album, Avalon (2008). Joining Green once again for the recording of Beautiful Things is his backing band, and close friends, Good Old War. Also featured is Circa Survive bandmate, Colin Frangicetto (“How It Goes”), Canadian musician, LIGHTS, (“Just To Feel Alive”), Ida Marie (“Can’t Be Satisfied”), and Maps and Atlases’ guitarist, Dave Davison, adds in some guitar licks (“Get Yours While You Can”).

Like Avalon, Beautiful Things provides tracks that sound more Folk-like, while others take on a heavier sound, such as “Can’t Have It All At Once” and “If I Don’t Sing,” that have the full band plugged in, giving off light distortion that resembles the nature of the song. “Do It Right” is a major contrast to the opener as it is sung in acapella with lyrics that give off a positive aura. And that really is just it – Beautiful Things just has positivity surrounding it through the soft acoustic guitar chords, vocal melodies, and choice of auxiliary instruments such as the tambourine. The tracks “Love You No Matter What” and “James’ Song,” both dedicated to Green’s one-year-old son, explore the theme of parenthood and joy. However, life has its ups and downs. Green diverts from the rest of the album’s positive feel, describing his struggles in “When I’m On Pills.” The album ends off with the track “Lullaby,” which actually sounds like a lullaby, where Green sings: “Beautiful things are coming to you.”

Green takes inspiration from anything and everywhere, making life his muse. The honesty and sincerity he shows through his personal lyrics have the capability of reaching the hearts of all listeners, making Beautiful Things, very beautiful indeed.