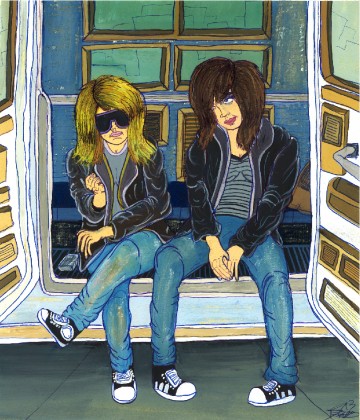 Too bad for you. This band is fucking killer, it really is. And, for the record, Becky Black and Maya Miller have probably already laid waste to some decrepit rock ‘n’ roll pit in your hometown at least a couple of times because The Pack have been touring anywhere and everywhere – and getting better and better and better at what it does, and then a little bit better still.

Now signed to Nettwerk Records, the Vancouver duo is poised to make the crucial breakthrough long predicted by the fawning Canadian music press and presaged by the ever-swelling ranks of its faithful fan base.  Formed in 2006 and following four releases – Unpersons (2011), We Kill Computers (2010),Funeral Mixtape (2008), Tintype (2008) – The Pack is an act that’s earned its current “bubbling under” status the old-fashioned way: by showing up and showing the people the goods one city and one new fan at a time and then coming back, time and again, with even more to offer.

The pair’s songwriting has expanded along with its diligently improving maxi-minimalist musicianship, too, to embrace churlish stoner-rock, infectiously woo-woo-ing bubblegrunge, bittersweetly expansive pseudo-shoegaze and a whole lotta “really loud, fun punk rock,” as Miller described the modus operandibehind the Pack’s Juno-nominated Unpersons to the Toronto Star in 2011.

On August 27th, Nettwerk Records will release a most proper introduction to the band in the form of an EP titled Some Sssongs.  The EP is a 5-song collection of tracks from previous albums (“Sirens,” “Haunt You,” “Positronic,” and “Deer”) and a new track (“Battering Ram”) from their upcoming 5th LP Do Not Engage, set for release early 2014.

The timing is perfect. Black has always been a terrifyingly unhinged vocalist and a fringe-dwelling guitar goddess non pareil, but she’s learned over the years to channel her copious talents outward with range and nuance. Miller’s Keith Moon-esque disregard for the health of her drum kit now similarly displays a creeping command of lyrical subtlety, while her recent decision to start chiming in on vocals has added a whole new layer of potential to The Pack A.D. package. The Pack A.D. didn’t get to be the two-headed rock-‘n’-roll beast it is today overnight, but by throwing itself headlong into rock ‘n’ roll and genuinely living it for seven years on the road and killing it in too many shitty, empty clubs to mention even when only a handful of lucky people were looking – and killing at least one exhausted touring-van-slash-touring-home along the way, to boot. Black and Miller earned the right to be the totally fucking bad-ass band they are today. If you’re not already acquainted with what they’ve accomplished together as The Pack A.D., it’s high time you strapped yourself in and took a listen.

Daniel is an illustrator/graphic designer based out of Austin Texas. He graduated from Pratt Institute with a Bachelors degree in Illustration and an Associates degree in Graphic Design.Daniel started his career in graphic design in the world of online casinos. Since then he’s worked with various clients from around the United States and Canada including but not limited to NHL, Subway, Paraco Propane, Pitney Bowes, Xerox, Conduent, Nestle Waters, The Spill Magazine, Stamford CT’s DSSD, Beechnut Baby Foods, Elizabeth Arden and much more.
RELATED ARTICLES
daniel adamsportraitsthe pack a.d.