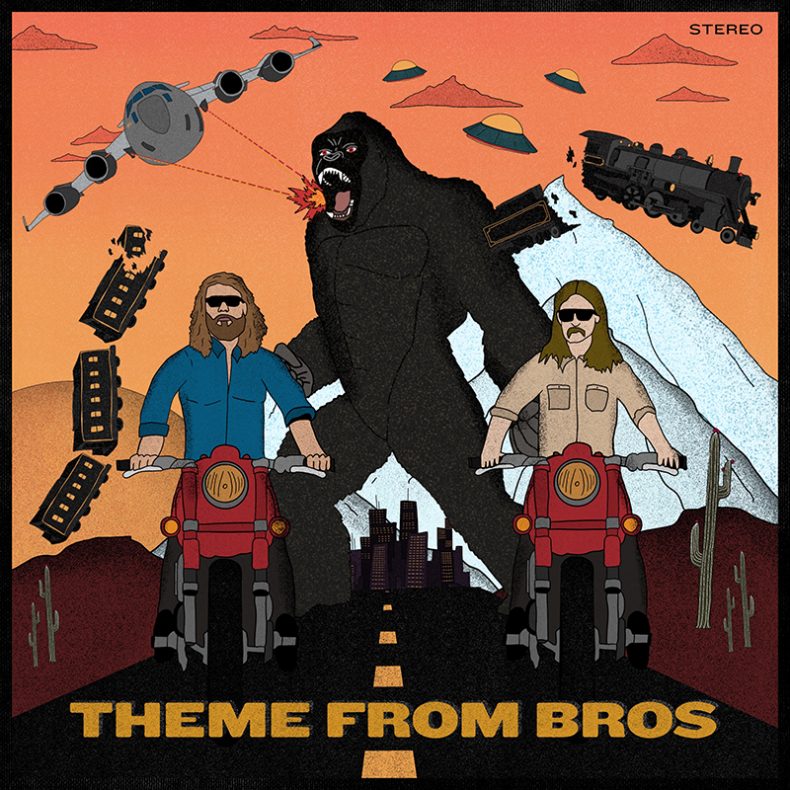 “‘Theme From BROS’ is inspired by our love of 70’s cop cinema and the film scores of composers like Lalo Schifrin,” explains Ewan. “The opening riff was originally conceived by Shamus as an Afro-Cuban guitar line, but really came alive when orchestrated for trombone. It’s the action-packed soundtrack to the cop movie that never was.”

Along with the action-packed soundtrack, is a quirky, action-packed video from Rob Fidel, who has been thriving in the LA art and film scene as a production designer and animator, becoming notable for his music videos. “Rob is a bud, who we met in LA through our good friend (and collaborator) Mat Dunlap who does all our art design work,” says Ewan. “Rob is a very creative guy who is also musical and that makes all the difference when it comes to collaborating on a music-based project. We made him a big long list of ridiculous things that we could be doing in the video, but asked him to basically make us look like badasses. As far as I can tell, he damn well nailed it.”

In 2014, when Ewan and Shamus Currie decided to take some time away from their main gig, The Sheepdogs, and indulge in a little musical experimentation under the banner BROS, little did they know that the ensuing Vol. 1 album would establish an entirely new identity for them. What began as a pure studio creation with VOL. 1, BROS not only displays the Curries’ dynamic creative bond, but also their playful sense of humour and easy-going relationship, something that can’t often be said of fraternal musical partnerships. As Ewan says, “The point of BROS isn’t about anything other than Shamus and I—two guys with very diverse record collections—writing and playing the sort of music we wouldn’t get to do in any other situation.”

The combination of visually evocative instrumentals and finely crafted Pop and Soul nuggets has undeniably become BROS’ trademark sound. The brothers received glowing feedback from fans and critics alike, while gaining further attention through the track “Tell Me,” which was adopted as the theme song for CBC Radio’s daily arts program ‘q’. “Tell Me” also peaked at #17 on the Canadian Alternative Rock chart, and to date has racked up a combined 11 million streams. The track has been synced by ESPN US, SportsNet, Hockey Night in Canada, Toronto Blue Jays, and enjoyed in-arena syncs with the Denver Broncos, Minnesota Timberwolves, New Orleans Pelicans, Minnesota Wild, Colorado Avalanche and Minnesota Twins. More information will be announced in the coming weeks.

SPILL NEWS strives to keep our readers up to date with news and events in the music industry. We keep you informed of the most recent information regarding new releases, tour dates, and information items about your favourite artists.
RELATED ARTICLES
brosdine alone recordsewan currie