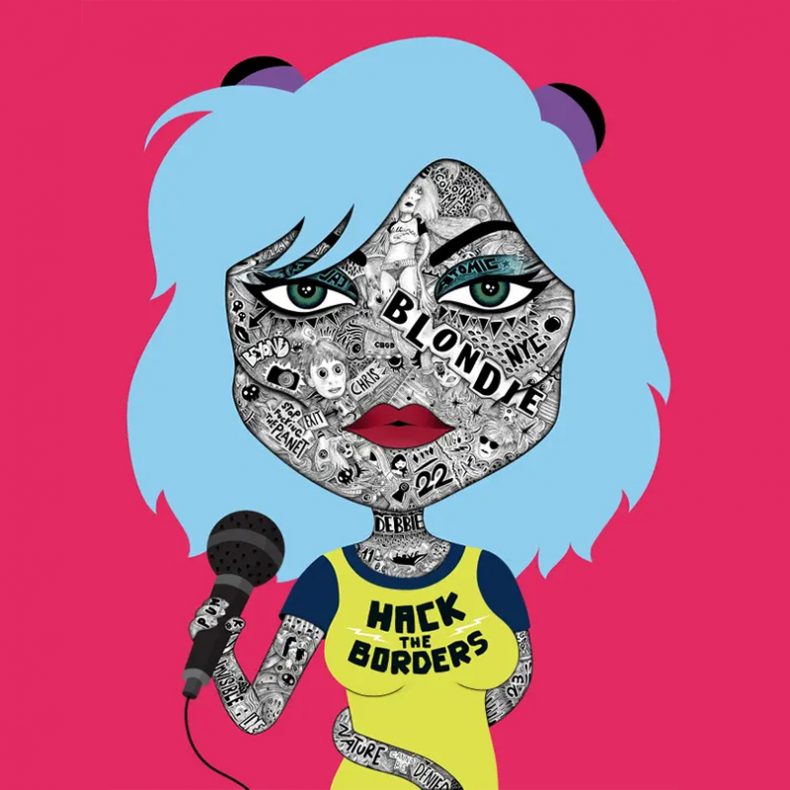 Legendary New York rock band Blondie and crypto art pioneer duo Hackatao announce their collaboration and the release of the first in a series of animated digital artwork, “Hack the Borders”, on August 6th at 6:30 pm ET – see teaser below. This unique artistic partnership connects the two very different art scenes from which their creators have hailed – it is a present day manifestation of the punk rock movement, fittingly in the form of crypto art.

Released through the digital art online auction platform Nifty Gateway “Hack the Borders” nods to one of the greatest art pioneers of all time, Andy Warhol. Blondie front-woman Debbie Harry and her friend Warhol created an everlasting cultural moment with the Commodore Amiga in 1985, as Debbie became the subject of his very first digital portrait, an image that is just as significant today as it was then. 36 years later, Hackatao and Blondie have joined forces to create their own one-of-a-kind artwork, which will drop on what would be Warhol’s 93rd birthday on August 6th; coincidentally S from Hackatao’s day of birth as well.

“Hack the Borders” itself symbolises a true act, from both Hackatao and Blondie, of hacking all borders and boundaries, and ultimately the limits of narrow-mindedness. And like Warhol’s iconic image of Debbie Harry, Hackatao’s digital artwork showcases Debbie’s legacy with pop-art colours, albeit with their own signature style, covered in drawings that often represent our inner demons and most hidden voices.

This collaborative creation will be made available in multiple editions, with each featuring musical accompaniment by Chris Stein, and a poem, written and spoken by Debbie Harry.

“I heard of Hackatao early on when the NFT phenomena went mainstream. Andy, who embraced modern technology, would certainly have been minting Warhol NFT’s. I am attracted to the lack of gatekeeping that thus far is a significant factor in all this.” explains Blondie’s Chris Stein. Debbie Harry adds, “Techno expansion and discovery has always fascinated me as did Andy. I love the idea of honouring his memory on his birthday this year with our collaboration with Hackatao.”

Andy Warhol has similarly been an artistic inspiration to us for his use of colours and trademark way of making art accessible for everyone. For Hack the Borders, we chose to release the project on August 6, which is not only the birthday of Andy, but also of S. of Hackatao. We felt it was a perfect way to pay homage to his genius, and connect us further to the project.”

Eleonora Brizi, Digital and Crypto Art Curator expands on the concept: “Curating a project like Hack the Borders is an honour, first of all, due to the creative forces involved. But even more than that, was the constant discovery of how such two different art worlds, eras, manifestations of creativity can be so connected.

We tried to go at the essence of Blondie’s art, beyond the icon, straight to the core of the spirit. Is that spirit still alive today? What were they doing at the time through their music and creativity and what are we doing today specifically through Hackatao’s art and more generally in the crypto art space? The answer was: they were, they still are and we are hacking the borders.”

The NFT will be released on August 6, 2021.  Visit Nifty Gateway’s website for updates and buying information. Nifty Gateway is committed to being a carbon negative platform; click here for more information on how they are accomplishing this.

SPILL NEWS strives to keep our readers up to date with news and events in the music industry. We keep you informed of the most recent information regarding new releases, tour dates, and information items about your favourite artists.
RELATED ARTICLES
blondienews