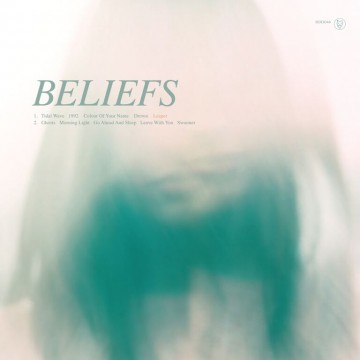 Toronto shoegaze band Beliefs are set to announce their sophomore album ‘Leaper’ on November 13 via Hand Drawn Dracula. This week the band shares the first single from the release, “1992.”
Beliefs started abruptly when Josh Korody and Jesse Crowe met at good friend and former Bassist, Patrick McCormack’s birthday party and couldn’t stop talking about the music of the 90’s. Through the love of My Bloody Valentine and Sonic Youth, the memory of reverb and fuzz was revisited and Beliefs was formed.
“Using their seminal influences as a catalyst rather than template, their self-titled debut album is a frighteningly assured and expansive effort, recalls last decade’s High Water Marks, Women or Deerhunter” ~ ROUGHT TRADE (UK)
Since their formation in 2010, Beliefs have released a two song single and b-side (Untitled, 2012 HDD) as well as a full length record (self titled, 2013 HDD, Manimal, No Pain In Pop) and are currently set to release their follow up, Leaper via HDD on November 13. Beliefs have been lucky enough to share the stage with fantastic artists such as; A Place to Bury Strangers, Disappears, The Breeders, Toy, Algiers, Moon Duo, Beach Fossils, Suuns, and Fucked Up.
Beliefs are prolific artists and musicians in the Toronto music scene, with Crowe recording in projects PRAISES and ROLEMODEL, and Korody as a founding member of WISH and NAILBITER as well as producing countless projects at his Candle Recordings studio. Beliefs are now set to present Leaper at shows and to festivals such as Supercrawl, POP Montreal, and New York’s CMJ along side the Hand Drawn Dracula family.
“Prepare to get hooked on the glistening new album from fuzzy dream-pop band, Beliefs” ~ DAZED

SPILL NEWS strives to keep our readers up to date with news and events in the music industry. We keep you informed of the most recent information regarding new releases, tour dates, and information items about your favourite artists.
RELATED ARTICLES
beliefshand drawn draculanews

by SPILL NEW MUSIC on July 6, 2021
BREEZE SHARES “COME AROUND (FEAT. CADENCE WEAPON)” NEW ALBUM ONLY UP OUT AUGUST 26 VIA HAND DRAWN DRACULA Toronto-based producer and artist, Josh Korody (Nailbiter, Beliefs) who works under the moniker, Breeze is today sharing his [...]
9.0

by Ryan Ruple on December 7, 2018
Praises In This Year: Ten of Swords Hand Drawn Dracula When it comes to a truly great album there are those in which the listener places themselves inside, exploring every aspect of the experience from the themes to its technicalities with [...]

by Susana Meza on November 3, 2017
Odonis Odonis + Beliefs w/ Chrysanthemum White Alder @ The Garrison, Toronto November 3, 2017 There are times in which you step into a venue not knowing what to expect, sometimes there is a veil of doubt regarding certain bands, however, last [...]