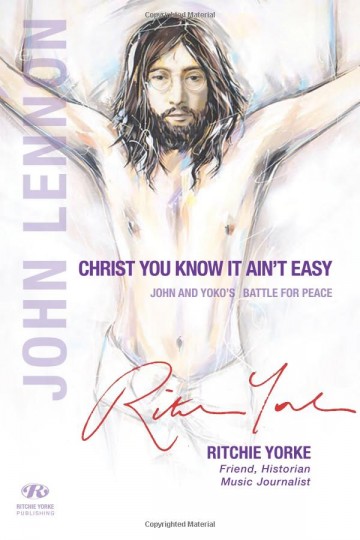 Australian author and journalist Ritchie Yorke is back in Toronto after many years absence to launch his first person account of John and Yoko’s Canadian Peace Campaign of 1969 and 1970.  The Montreal Bed In. The Toronto Varsity Rock Concert.  John and Pierre. Traveling the World For Peace. This is the real story, the real truth.

Yorke, Canada’s first counter culture journalist, is in Toronto to overseeing the publication of CHRIST YOU KNOW IT AIN’T EASY: JOHN AND YOKO’S BATTLE FOR PEACE.

The eBook will be published on October 9, which would have been John Lennon’s 75th birthday. Yorke produced his book with the assistance and co-operation of Yoko Ono who has written the foreword.

The editor told him that he couldn’t work for John Lennon and the Globe at the same time and that he had to make a choice between them. It took him about a sixth of a second to decide!

In the early 1970s Yorke found himself stuck in the middle of a world in change. He was passionately caught up in the Peace cause. He travelled around the planet selling the gospel of peace on the Lennons’ behalf (he and travel buddy, rockabilly legend Rompin’ Ronnie Hawkins thundered through 15 countries and 52,000 miles in five weeks).  They were all over the front pages of Hong Kong tabloids – seizing headlines when he and the Hawk risked their lives illegally crossing into Red China to present the War Is Over message to the Communist Chinese at Lok-ma-Chau.

The Spill Magazine is a Toronto-based online publication dedicated to covering the independent music scene with a strong focus on our thriving hometown talent. Our writers bring you up-to-date news, in-depth features on musicians and reviews for the latest CD releases. We also travel to the front lines for all local festivals including Canadian Music Week and North by Northeast. Don’t forget to check out our Facebook and Twitter pages for all daily Spill updates.
RELATED ARTICLES
booksjohn lennonyoko ono