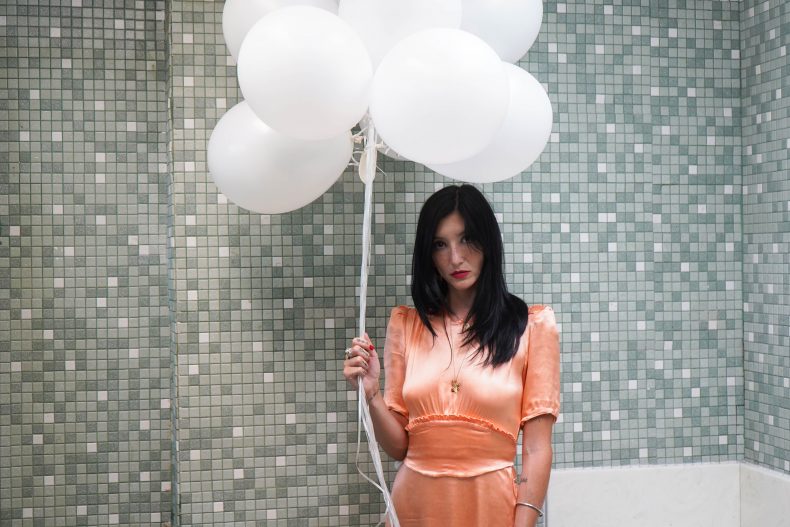 “On The Run” is the newest single from Queen Kwong’s upcoming new studio album. The new track from the brainchild project of Carré Callaway, “On The Run” features keys and synths from close friend Roger O’Donnell (The Cure). “On The Run” is taken from Queen Kwong’s upcoming cathartic third album Couples Only, which confronts betrayal, mortality, and divorce, and is due out July 12. Previously, Queen Kwong released the lead single “I Know Who You Are” alongside an eerie Possession (1981) inspired music video.

Speaking of the track, Carré says: “‘On the Run’ is the song that inspired the record’s title, Couples Only. It’s a romantic, slow-dance-sounding song, but if you listen carefully, the lyrics are more realistic and self-aware. I spent a lot of my life confusing dramatic, whirlwind, fleeting romance with true love, but they’re not the same thing. Mature, healthy, loving relationships can be quite boring, and even though that’s what I want, it’s also what I’ve always run from.”

Couples Only is a fearless account of facing the worst betrayals and accepting the deepest losses. It’s the realization of one’s mortality and the impermanence of everything we know and cherish. But, ultimately, it’s a testament to the endurance of the human spirit. Because while this record is unashamedly about the darkest period of Carré’s life, it doesn’t wallow. It can be accusatory and violent, but there’s no time wasted on self-pity. “It’s not a fun record,” Carré admits, “but, at times, it’s a funny one.”  Indeed, there’s levity here. Even the album title itself is a tongue-in-cheek dig at herself. It seems as though losing everything ultimately liberated Carré—perhaps because, as she says, “it makes you realize what truly matters, and the things that don’t matter end up meaning even less. It frees you from a lot of bullshit.”  Needless to say, the album is Carré setting the record straight, and across these 11 songs, she takes no prisoners.

As with every Queen Kwong release, all music for her upcoming album was entirely improvised and recorded on the spot—nothing was pre-written lyrically or musically. A primal scream of freestyled lyrics that contain the anger, fury, frustration and sadness that was dealt to her in a quick succession of events that started with a diagnosis of cystic fibrosis in 2018, the dissolution of her marriage two months later that left her exiled with nothing but a suitcase and two guitars.  “I was homeless for nearly a year, just living on friends’ sofas, and I’m still in the process of rebuilding my life,” she says, “but it’s reassuring that we can survive things that feel unsurvivable.”

SPILL NEW MUSIC: QUEEN KWONG RELEASES HER TAKE ON A ‘POP’ SONG “WITHOUT YOU, WHATEVER”