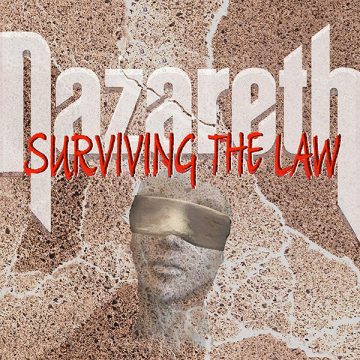 Surviving The Law is Nazareth’s 25th studio album. Of course, over their 54-year history there have been many member changes, with only one original member remaining in the band, Pete Agnew on bass. Carl Sentance took over lead vocal duties when original vocalist, Dan McCafferty, left the band due to health concerns. Rounding out the band are Pete’s son Lee Agnew on drums, who joined the band in 1999 , and Jimmy Murrison on guitar, who joined in 1994.

The question is, how does 2022 Nazareth sound? To be honest, not very different from their 2018 album, Tattooed On My Brain, although Surviving The Law has a rougher edge. Here the band is much less polished and it is full on rock ‘n’ roll. It is heavy metal, and at times they are dipping their toes in grunge. Songs like “Better Leave It Out” have some of the classic Nazareth melody hooks, surrounded by blistering guitars and loud drums, but it still maintains that style that Nazareth spent so many years carving out. Vocally, Sentance does not sound like McCafferty, but that is fine, as I cannot picture him singing these songs either. What they have done is extended their history and added on to the legacy.

The band is remarkably tight and they play closely together. There is room for everyone to shine. The main star, however, is Murrison, whose guitar is never second rate nor does he ever stop. For each song, he comes up with new and inventive ways to solo and to utilize his instrument to add to the overall mood or style of the song. Compare his playing in “Mind Bomb” to “Waiting For The World To End”. On the latter, he is much more restrained yet powerful, while on “Mind Bomb”,  it is a focal point of the song.

Overall, this is a great album. My only complaint is there are no power ballads. In many ways they helped invent that genre with “Love Hurts” which always added that variety and diversity to their albums. Here, although the songs are somewhat different styles of hard rock, a few slower songs or different styles would have added to the overall album.

As it is, this is the second album for this version of Nazareth. This is a band with history and a legacy. Their largest audience, outside of their native Scotland, has always been Canada, and that trend should continue here. This is a strong, powerful album. With Surviving The Law, the band proves that there is a lot of life in Nazareth. In many ways they can go toe to toe with any new metal/hard rock band. Surviving The Law may not be groundbreaking, but it is cohesive.