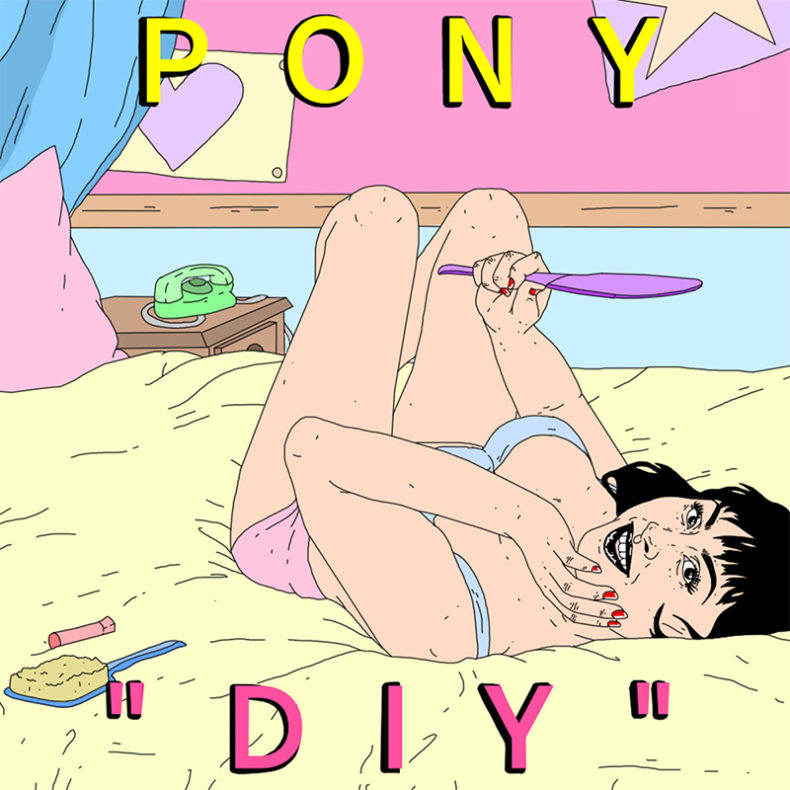 Toronto’s PONY are announcing their signing today to Buzz Records.

PONY began in 2014 as an idea hatched by singer/guitarist Sam Bielanski and a friend in her Toronto bedroom. “We were both dating dudes in the same shitty band at the time” she says, “and they were really shitty dudes, so we started writing songs about how our boyfriends sucked and eventually that turned into us starting band.” As the pair wrote more songs they began recruiting additional members to round out the line up and after a few early changes settled on a four piece arrangement of Bielanski, bass player Eva Link, drummer Matt Sandrin and guitarist Stephen Giroux.

The band recorded an EP and started playing shows in Toronto, rapidly attracting attention as they refined their sound – a strain of punk-inflected guitar pop that sits in a lineage with 80s UK acts like Talulah Gosh and the Dolly Mixture, 90s groups like The Breeders and Veruca Salt, and their Canadian powerpop forebears Cub – and began appearing on bills with their eventual Buzz Records labelmates Casper Skulls and Greys, as well as acts like Colleen Green, the Coathangers, Chastity Belt and Nicole Dollanganger in 2016. In the fall of that year the band returned to the studio to record the singles, “DIY” and “Alone Tonight,” that will make up their first release on Buzz records, a 7 inch due out in the spring.

PONY are currently plotting a trip to SXSW, preparing for upcoming winter and spring tours, and working on their debut EP for Buzz, which they expect to release in the fall of 2017. For her part Bielanski is excited about what the future holds for her and her bandmates, and despite the band’s almost accidental origins, has a clear vision of what PONY means to her.

“I wanna see the world with my three best friends, but that’s not all of it,” she says. “A few times younger girls have come up to me at our shows and said “that was really cool, what you did, I’ve always wanted to do something like that” and it’s just like then go, go and do it! Pick up a guitar and make some noise and scream about your feelings, and just do it. That’s the goal of the band to me, to show people, primarily women who maybe haven’t been exposed to enough other women playing music, that it’s not easy by any means but its definitely attainable. If it’s something that you want to do then you can fucking do it and you don’t have to give a shit about if you’re cool or if dudes are going to be condescending or whatever, you can just make some noise with your friends.”

by SPILL NEW MUSIC on May 2, 2018
CASPER SKULLS PREMIERE “COLOUR OF THE OUTSIDE” VIDEO Buzz Records It’s been an exciting 6 months for Casper Skulls in [...]
9.0