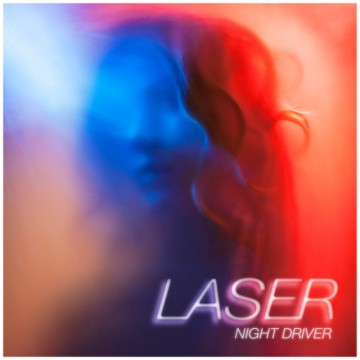 The galactic dream-pop group emerged this August with their debut single, “Leaving It Too Late” and were quoted as, “Layering textural keyboard notes with theremin-like glissandos, Leaving It Too Late evolves into a warm, yet slightly detached groove.” Second single, “Do We All Feel It”, followed in September was hailed as “a kaleidoscopic tapestry of dancefloor-ready drum machines and steady keyboards.” Night Driver has already received glowing reviews, one stating that the dreamy debut album “creates a moody atmosphere that sounds cool, yet exudes warmth.”

Laser’s sound takes cues from electronic and atmospheric albums and late night country drives from Lisa and Paul’s Toronto home to Marty’s remote “studio in the forest.” Their music is an example of both the synthetic and the analog, both city and forest, of an atmosphere creating a score for an introspective and meditative drive out of town.

Night Driver was written, recorded and produced by Laser at Casa Bonita Studio (Mono, ON) and The CockPit (Toronto, ON). Mastered by Martin Davis Kinack at Casa Bonita. And includes special appearances by Coenraad Bloemendaal, Blake Manning and Jud Ruhl.

Laser made their live debut last month in Toronto supporting Rhye and Stars, with the band’s first foray into the U.S. in the works for the spring.

by Ljubinko Zivkovic on March 19, 2021
Jason Collett Best Of Arts & Crafts When Broken Social Scene burst on the scene at the turn of the millennium, the band made a huge splash due to the fact that the collective itself had [...]