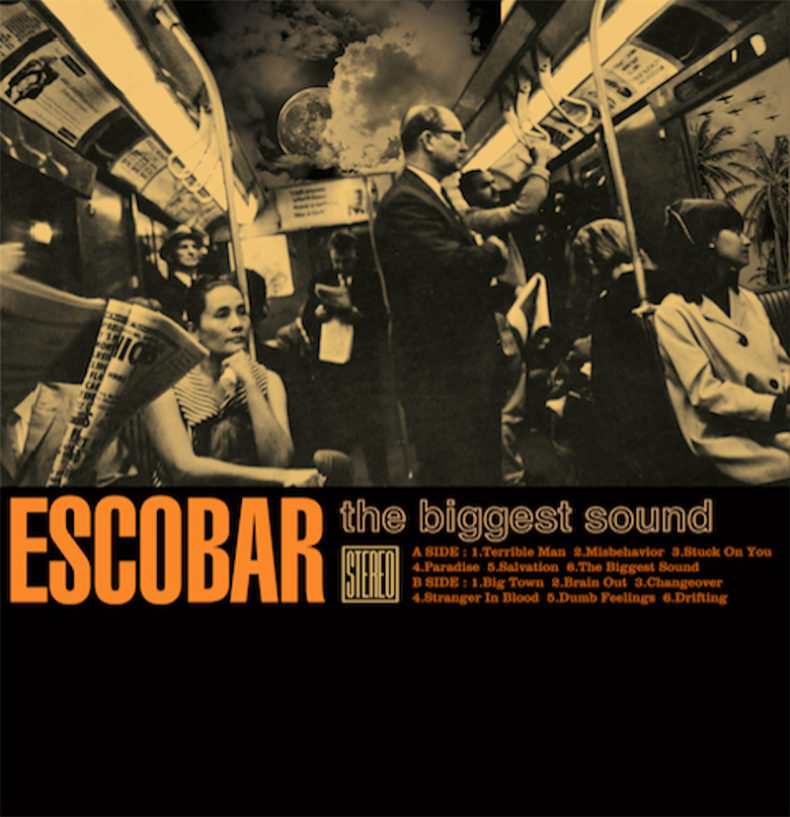 Escobar was formed in 2014 in Limoges, France, by Remi Lucas (Weird Omen, The Anomalys) and Charly Kayo (The Bushmen, Daria). The band’s 2015 debut, エスコバル and the 2016 second album, Bird Of Prey, saw the band touring all over Europe including big festival stages.

The Biggest Sound boasts, but backs it up with a cracking 12 track sludgefeast of sounds not heard since 1991 in Butch Vig’s Madison, Wisconsin studio who engineered some the 90’s biggest and best with Laughing Hyena’s, Sonic Youth and Nirvana.  Escobar hearks us back to that era of massive pedal stomping madness with fat walls of distortion and feedback with BIG buildups reminiscent of those classic slabs from Sub Pop and Amphetamine Reptile Records. It really does feel like 1991 all over again on this record probably because Escobar aren’t hitting 50 years old like Dave Grohl is.

Orders placed after the preorder period cannot be guaranteed on orange vinyl; all other orders will be on 12″ black vinyl. Preorders will ship the week of November 20, 2017.

by Norman Darwen on July 30, 2021
Hipbone Slim And The Kneetremblers Tremblin’ Dirty Water Records Hipbone Slim’s universe collides with ours every so often. On the evidence of this 40-track double [...]
8.0

by David MacDonald on July 6, 2019
Les Bof! Voila! Dirty Water Records Worshipping at the altar of proto-garage rock and yé-yé, Franco-Scottish quartet Les Bof!, have returned from an eight-year hiatus with Voila!, their second [...]
8.0

SPILL SINGLE REVIEW: THE CRETINS – “HAVEN’T GOT A CLUE” (SINGLE)

by Gerrod Harris on March 31, 2019
Various Artists The New Testament Dirty Water Records Whether you’re an angsty teen looking to frighten your uptight parents or an aging punk who refuses to sell out to the [...]