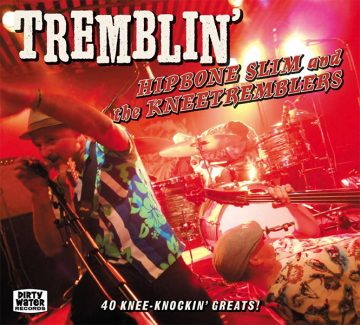 The man also known as Sir Bald Diddley (and a bunch of other equally unlikely alternative identities) obviously has a thing for his near-namesake, rock ‘n’ roll pioneer Bo Diddley. Have a listen to the opening “Ain’t Got A Leg To Stand On” and Little Richard (‘Baldhead’).

He also clearly appreciates the rhythm ‘n’ blues efforts of the beat groups of his native UK in the early ‘60s, evident in the delivery of “Throw A Stone, Hide Your Hand”, and draws inspiration from Peter Green’s original Fleetwood Mac from a few years later. He can sound uncannily like Green vocally, and some song themes also seem to have similar inspirations, as in “Voodoo Love”.

There is a strong element of ‘80s psychobilly on a good few occasions here, and then he can also – just once or twice – summon up the blues/ roots rock of The Black Keys. Obviously he also has a fondness for some of rock ‘n’ roll’s wackier 45s – try ‘Hairy Lula’, ‘Chicken Skin’ or ‘Tombstone Rock’.

The tracks – none of which have appeared on CD before – originate from Slim’s last three albums:  Tremblin’ The Blues, Ain’t Got A Leg To Stand On, and The Toppermost Sounds Of… Others come from 45s released in Spain, Germany, Britain, Slovenia, and the odd (very odd) compilation album. All are good rocking, irreverent and totally good fun.

The Spill Magazine is a Toronto-based online publication dedicated to covering the independent music scene with a strong focus on our thriving hometown talent. Our writers bring you up-to-date news, in-depth features on musicians and reviews for the latest CD releases. We also travel to the front lines for all local festivals including Canadian Music Week and North by Northeast. Don’t forget to check out our Facebook and Twitter pages for all daily Spill updates.
RELATED ARTICLES
album reviewalbum reviewsdirty water records
8.0