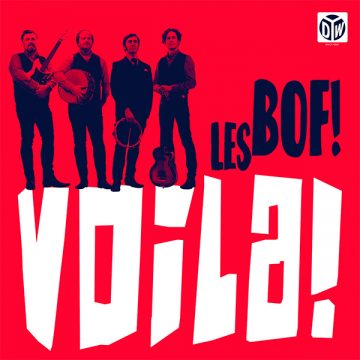 Worshipping at the altar of proto-garage rock and yé-yé, Franco-Scottish quartet Les Bof!, have returned from an eight-year hiatus with Voila!, their second full-length through the London-based Dirty Water Records, featuring alumni from some of the most talented players in the Scottish beat scene.

Succinct, yet with enough dynamic range to keep old fans and draw in new, Voila! mines its influences almost exclusively from the early-to-mid 1960s, with “Fin De Monde”’sbuzzsaw guitars and “SouviensToi”’s blissed-out shake being particular highlights. Production wise, it’s lush, yet sharp at the same time – there’s no clinical precision and digital recording on Voila!; it’s hard to imagine that the album would have the same effect if it had been given the modern treatment.

As a whole, Voila! is minimal, yet compelling, with all fat trimmed out. Sure, it’s imitative, and some songs drag a little, but when it’s obvious how much fun the band are having, who cares? Let’s hope we don’t have to wait another eight years for their third album.

David MacDonald is a Scottish musician and writer who moved to Toronto on a humid day in May 2017, wishing to move away from tourists and to continue to see excellent music in small venues and house shows.
RELATED ARTICLES
album reviewalbum reviewsdirty water records
10