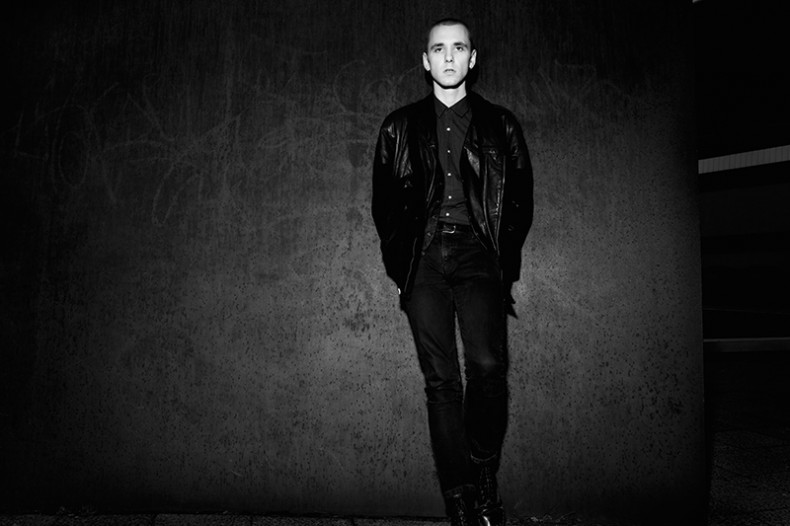 Max Gruber is Drangsal, though the man and his persona are so nervous that their turmoil makes them melt into one. Max rarely sleeps, he works restlessly on his music, day and night. He doesn’t dream, but his days are satiate with fantasies. “Seid lieb zu uns, wir sind noch Kinder” –Be kind to us, we are only children–, pleads the mastermind into his microphone, at once delicate and brutal at heart. The concert is sold out – and the crowd is not just kind, they are euphoric. Even though there are only a few demos so far. This young guy has got charm, that’s for sure – his entrance promises a spectacle, and his energy lives up to that.  Harieschaim, the 22-year-old’s first album, is a succession of fast, pumped pop songs – let’s say: a pop prodigy? –, no breathing space, the referential decade of the 80s gets run down and broken.

Harieschaim, today’s Herxheim, is a strange village too – Max’s birth place, to be exact. Nowhere else in Germany has cannibalism existed as long as here, in the nearby place Hinterkaifeck an entire family was murdered, naturally distant relatives from Max’s family tree. But Herxheim is where it all began: His father owned a pub, recorded mixtapes for it, played them to his boy in the car. The child became so addicted to the often English music that he would soon express himself bilingually. A popcultural childhood. At age 5 Max watched MTV with his parents, got lost in Marilyn Manson’s The Dope Show. That was when he knew: I want to be something like that, somehow. A weirdo. At least when puberty had hit, he realised he already was one. But you might just as well call him a character. Now it was up to the determined youngster to find shapes for his diffuse being. And all of that in a little village in Germany’s deeply Catholic southwest! It was a school of hard knocks for Max: “Either I’ll let them beat me up in the break, or I’ll paint my fingernails an even brighter colour”.

At least this school has done no harm to his art. Neither has his autodidactic process of learning:  “At 14 I realised: If I want to make music, I have to pick up on this.” And no matter what he did, for Herxheim it would be too mad. So he leaves: In Landau he befriends Sizarr during their early days, moves through Mannheim to Leipzig and Berlin, always hunting for a way of expression. Early on he meets the later hit producer Markus Ganter. Back then Ganter is still a blank page himself,  but Max decides: this is the guy I’m going to work with someday. A few years later Ganter gives him a call: How about we make your album now? Max loses it. This thing is going off. Ever since the first songs, Max is supported by Ganter’s flagship, Benjamin Griffey alias Casper. Max owes him a lot.

Although there are points in this biography where one could call it fate, it is a troubled one at the same time, and left its traces. For instance on the tattoo-lined skin telling stories of Max’s obsession with eccentric industrial protagonists or the obscure per se. This is where we meet a soul that knows darkness – and yet the ten songs on Harieschaim appear remarkably catchy, sophisticated and friendly. One might even claim that several contradictions meet at once in the music of Max Gruber. And if there is so much abyss, then why does listening to it feel as if Max wanted to embrace the whole world? “If I told people on the street about what’s going on inside me, I’d have issues – but when I sing about it, it makes people dance. And at the end of the day I’d rather give them something to be happy about than something that harms them. It’s as if I put all the bad stuff into a tube and what comes out on the other end is something that people like – that’s seems like a nice thought to me.” His principle works like the idea of the Wolpertinger, the cross-breed creature from Bavarian mythology which he named a song after: All the things he wants to be, but can’t represent (because they don’t exist), he takes them apart, shapes them into one and becomes this being, who doesn’t only carry the contradiction within himself but proudly wears it on his sleeve.

Then another sentence tumbles out of Max’s mouth and pretty much says it all: “Music is often a substitute for tears, but in the end I’d rather laugh than cry.” His music – from his teenage bedroom to the big stage – sends out an invitation to join in. And this is how Max Gruber arrives at life and brings his music into the world!

Drangsal’s debut album Harieschaim will be out on Caroline International on 22nd April 2016.

by Ryan Sagadore on December 7, 2018
Van Morrison The Prophet Speaks Caroline International Since 1974’s Veedon Fleece, Van Morrison has struggled to put out a consistent body of artistic work. There were a few [...]
10

by Synescape on September 22, 2017
IAMX Unfall Caroline International/Universal Music At the heart of all revolutions is a seed of madness, a frustrated intelligence that cries for transformation. In a time when electronic music was [...]
8.0

by James David Patrick on March 31, 2017
British Sea Power Let The Dancers Inherit The Party Caroline International Since the release of their 2003 debut The Decline of British Sea Power, the band has been one [...]