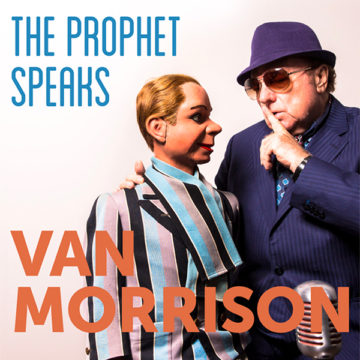 Since 1974’s Veedon Fleece, Van Morrison has struggled to put out a consistent body of artistic work. There were a few triumphs in the ‘80s with Inarticulate Speech of the Heart and Irish Heartbeat, but the glories of his early output seemed to be lost in the past. But despite the artistic struggles in the ‘80s and ‘90s, The Belfast Lion continued to put out a steady stream of music and rarely took more than a year in between each release.

The Prophet Speaks marks Van the Man’s 40th studio album since his solo debut in 1967. Four of those very albums have been released in the last two years. It’s an incredible feat and while not all 40 are worth listening to, very few can lay claim to a milestone such as that.

Over the years, Morrison has experimented with genres as varied as rock, R&B, folk, traditional Celtic music, and even jazz. The latter genre is what we find dominating The Prophet Speaks.

The sound of the LP is lush, full, and well-polished, like a modern-day Blue Note recording. It’s quite clear that Morrison has a knack for picking out talented musicians. In saying, that, the album really does take a while to really kick off. The musicianship on the first several tracks is dull and predictable blues scales. Though the technique of the players is clearly there, we’re just lacking the feeling behind the notes.

Thankfully, a good portion of the album does feature great chops, most noticeably from guitarist Dan Wilson, who lends his buttery solos to “Teardrops” and “I Love the Life I Live”. Think Kenny Burrell ala Midnight Blue.

Joey DeFrancesco, who recorded an album with Morrison earlier this year, lays down some mean organ licks as well but really stands out when playing his horn. On the title track, DeFranceso’s muted trumpet phrasing is pure ‘50s nightclub and it’s delicious.

And of course, there is Old Man Van who really hasn’t lost a step, at least vocally speaking. For a 73-year-old, he sounds incredible with not much of a change in vocals in the last few years. Morrison is relaxed here and quite settled into the Manhattan night club vibe of the music. His croons are quite calming but do spruce up a bit on the Solomon Burke cover, “Gotta Get You Off My Mind”. Its R&B like vibe would have settled in nicely on any of his early ‘70s discs.

The Prophet Speaks is not a cutting edge record, nor is it a step forward for Van Morrison. He’s a man who is beyond settled in his ways and there’s certainly no changing that. In the end, that doesn’t really matter. Morrison knows how to deliver a solid piece of work even when he isn’t trying to break new ground.

As a child growing up in the suburbs, Ryan found music as a way to soothe his boredom. After first hearing AC/DC at the age of 10, he was hooked on music. Tracing its roots to the ‘50s, he became obsessed with Elvis, Buddy Holly and Chuck Berry. Somehow that led to grunge, then psych-rock, then jazz, etc. The list goes on and on and his collection of vinyl records continues to grow.
RELATED ARTICLES
album reviewalbum reviewscaroline international
9.0