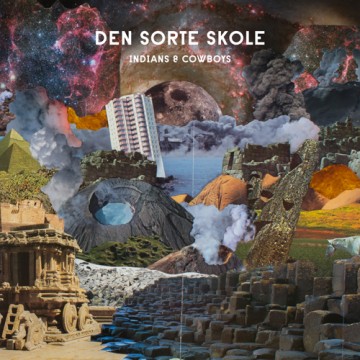 From middle-eastern dancehall madness, freaky jazz experiments and heavy dub psychedelics to beautiful piano trips, dark machine raids and spaced-out tribal traumas. From here to there – out there, and everywhere.

This is the sound of globally recognized, critically acclaimed Danish sampling duo Den Sorte Skole’s upcoming 78-minute album, Indians & Cowboys. Here, forgotten musicians from our common musical treasury come together to jam in a global ghost-orchestra crossing time and space. Stitched together by thousands of samples from old vinyl records from all corners of the world this kaleidoscopic musical journey goes way beyond confines of genre and style.

Today the sampling wizards reveal and offer up the album’s first single, “Heli Yosa” as a free stream and download – super eclectic and made from an immense amount of samples lifted off more than 25 old vinyl records from 13 different countries and six continents between 1956-1996. The samples include traditional horns from Iran, distorted flutes from Syria and Turkey, synths from ex-Yugoslavia, sufi-chanting from Senegal, fuzzed-out guitar from New Zealand, percussion from France, throat-singing from Italy, and bad-ass drums from India all blended together into a seamless whole by DSS. It’s the perfect example of the duo’s musical universe that draws on cultural inputs from every corner of the world leaving no border untouched.

With an immense amounts of samples, even finer stitched collage work, even more diverse musical energies and a renewed complexity of composition derived from their continuing work as composers in residence at the National Danish Chamber Orchestra, this is arguably the most ambitious sample-based album ever made.

In an age where sample usage is a hot button topic, Den Sorte Skole stand as crusaders fighting for the right of musical collaboration and fair use. With soundbites that can come anywhere from 50s Rockabilly to 1920s big band, DSS have compiled a 30-page booklet informing the listener of the orgin of each sample and where to find it. They scout out each sample to download as MP3’s, then purchase the albums as a way to pay respect to the artist for using the sample. Because of their heavy sample usage, DSS are a unqiue case who cannot sell their music via iTunes or any other major music platform.

Indians & Cowboys will be out on 2xLP distributed worldwide by Finders Keepers Records and as a high quality digital download on October 26th, 2015.

With the Copenhagen sample-duo Den Sorte Skole on stage there are no genres and no boundaries. This is musical storytelling across time and space. Armed with turntables, samplers and effect-machines they take you on a dark journey through everything from Moroccan traditional songs, Indian hymns and field recordings of Cameroonian Pygmies to Himalayan reggae, French industrial noise and German electronic music. From beautiful soundscapes to heavy beats and everything in between!