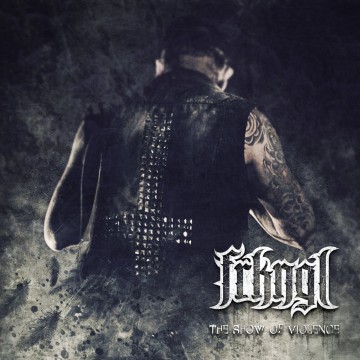 “The Show Of Violence” live album to be released along with video.

October 9th 2015 Tallinn, Estonia- Industrial-Metal artist, Freakangel have released their live DVD “The Show Of Violence” for free. “The Show Of Violence ” is a 45 minute live performance video that was filmed during Freakangel’s “The Ones To Fall” tour in the winter of 2014 in their home town of Tallinn, Estonia. “The Show of Violence” can be streamed for free via the bands website starting today as well as Freakangel’s You Tube Channel.. Freakangel states ” They have made the video available for free to thank their fans for the many years of support”

“The Show Of Violence” will also be available as an eleven track live album today. It will be released as a digital only album by the Belgium based label Alfa Matrix. It can be purchased HERE

Freakangel is an Estonian Industrial-Metal band founded at the very end of 2009. The band toured a lot over Europe since 2010 and performed at many events including festivals like Wave-Gotik-Treffen (Germany), Dark Munich Festival (Germany), Essen Original (Germany), Summer Darkness (Netherlands), Castle Party (Poland), Resistanz (England), Lumous and Findusry (Finland), Hard Rock Laager (Estonia) and lots of club shows in Germany, Russia, Switzerland, Chech Republic, Poland, Finland, Estonia, Sweden and etc… The band is signed to Belgium based label Alfa Matrix and has released three albums:“The Faults Of Humanity” (also released in Japan via Deathwatch Asia), “Let It All End”and “The Ones To Fall”. The band also released the DVD “The Faults Of Humanity: live”(sold out) and three digital EPs “Porcelain Doll”, “The Book Of Violence” and “Into The Fire”.

SPILL NEWS strives to keep our readers up to date with news and events in the music industry. We keep you informed of the most recent information regarding new releases, tour dates, and information items about your favourite artists.
RELATED ARTICLES
alfa matrixhigh road publicitynews

by SPILL NEW MUSIC on September 21, 2022
C-LEKKTOR SIGNS TO BELGIAN ELECTRO LABEL ALFA MATRIX AND ANNOUNCES BRAND NEW ALBUM NEW WORLD DISORDER OUT IN OCTOBER ALFA MATRIX Run for shelter: one of the leading bands from the Mexican dark elektro scene strikes back! After having been [...]

by SPILL NEW MUSIC on May 28, 2018
I:SCINTILLA UNLEASHES “CARMENA SATURNA” ALFA MATRIX After a brief hiatus, Chicago-based indie electro-rock group, I:Scintilla, has broken their silence.  The first track from their upcoming album comes with a surreal music video with [...]

by Kathy Nichols on March 29, 2017
WONDERS & MONSTERS AN INTERVIEW WITH JEAN-LUC DE MEYER OF UNDERVIEWER Everybody has to start somewhere.  Front 242’s Jean-Luc De Meyer and Patrick Codenys started in 1978 in a music project called Underviewer, the debut album of which, [...]