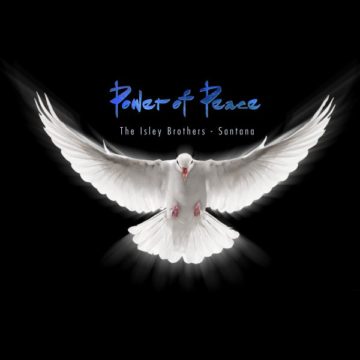 Carlos Santana collaborating with other artists is not news. He has had an entire career where he has collaborated with many different artists, usually to great success. Just think of 1999’s number one album, Supernatural, where he had hits with the likes of Dave Matthews, Rob Thomas and Eric Clapton. And that is just one album. What does make Power of Peace (a great album title, by the way) unique is that the entire album was recorded with The Isley Brothers. When you listen to the album, you have to wonder why it has taken till 2017 for these guys to team up.

The album is exactly as you would expect, slickly produced, full of amazing playing and some of the sweetest vocals this side of Heaven. Keep in mind that Ronald Isley has been singing with The Isley Brothers since 1955 and his vocals sound as good today as they did 62 years ago. Sure, a bit deeper and a bit older but he sounds stunning.

His younger brother, Ernie, who has been with the band since 1973 provides backing vocals and rhythm guitar. Santana (who has been around since 1967) provides the suitable and brilliantly played music to accompany the beautiful vocals.  To further make this album a bit of a family affair, Santana’s wife Cindy Blackman Santana plays drums, and Ronald and Ernie Isley’s spouses provide backing vocals.

The songs are very wisely chosen. Dipping into the old and the new, the album is a brilliant balance and really provides something for everyone. This is the one CD I’v heard this year that could be put on in the car for a road trip and no one in the family would complain.

The highlights are many, a brilliant and timely cover of Marvin Gaye’s “Mercy Mercy Me – The Ecology” sounds fresh and relevant today as it did when Gaye originally released it in 1971. Also worth noting is their take on The Chamber Brothers’ “Are You Ready” and a simply stunning version of the old Billie Holiday song “God Bless The Child”. That song brings chills.

Not every song works, “Higher Ground” comes to mind. But the album is a strong throughout and Santana delivers some beautiful guitar work. The album has an overall spiritual feel but that does not make the album religious. It is an album yearning for world peace, which in these days would certainly be welcome.

A great album, at times overproduced and too slick. When all’s said and done, it is an album that does stand out in the music world today.

Born and raised in Whitby, Aaron discovered music through his love of The Beatles. This led to a career in radio, writing for various publications, and ultimately a radio show about The Beatles (Beatles Universe), which ran for over four years. When not immersed in music, Aaron enjoys spending time with the loves of his life -- his wife Andrea, and daughters Emily and Linda (all of whom have an intense love of music too).
RELATED ARTICLES
album reviewsare you readylegacy recordings
7.0