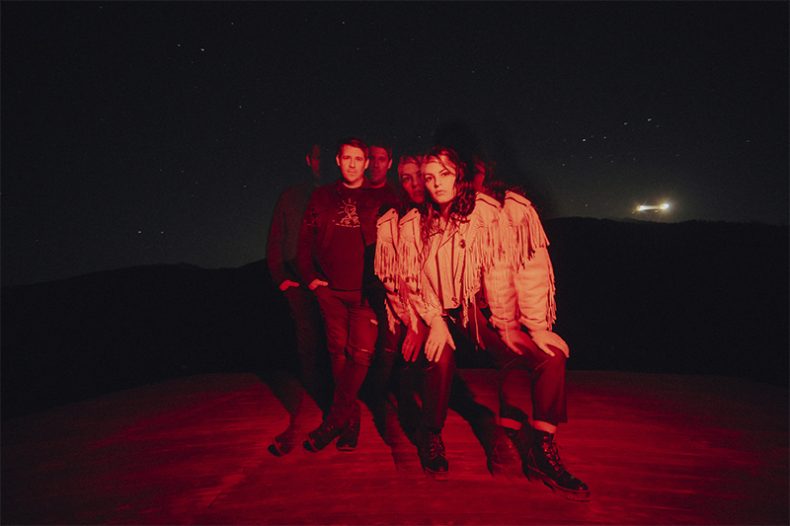 In an epic return to form, alt-rockers Dear Rouge dropped their infectious single “Fake Fame” back in September, the first track from their new album due out in 2022. The track has rocketed up the Alternative radio chart, and cracked the Top 10 in less than a month.

The song came to us when we were at our friend Brendan Canning’s (of Broken Social Scene) house after a semi-successful writing session at a studio nearby. He invited us over to his beautiful heritage home in downtown Toronto for a hang. Of course, we couldn’t refuse. Surrounded by his impressive record collection and our bellies perfectly full of pizza and wine, I sat down at his upright piano. As I played and enjoyed the vibe, the riff in the chorus and the words just came right out. “Life goes by and I can’t keep up,” I kept singing it over and over. Right away Drew picked up an acoustic and Brendan chimed in with some amazing guidance, the song’s structure, and it all just kind of happened. We knew we had something special from that evening on.

We ended up writing the rest of the tune at our cabin at Cultus Lake. The verse lyrics were interesting to write, because we talked about situations in our own lives. Feelings and times of nostalgia that we didn’t want to end, or so badly wanted to end. Sometimes it seems like life is going forward and you are stuck with all the unanswered questions or times you wish could go back to. Years can go by in a flash and you wonder what happened to all that time. This was our vulnerable side on that, almost a journal of how we often feel after a long weekend with friends, or right after a call from a doctor or family member expressing losses. Life is so up and down and it’s a ride we can’t get off of.

Recording this song was a beautiful experience. Thomas D’arcy at Taurus Recording has such a wonderful set up. His studio is actually in a renovated church building. The vocal booth is set up in an old baptism tank. With our deep roots in our Christian faith, that seemed so fitting. This was the first song I sang on the album that I cried while I was recording it. There was a flood of emotions, and I had to take a second before I could go on. Thom is so good at letting those moments come naturally, so he gave me the time I needed.

The next day we came into the studio and he had ordered us McDonalds breakfast, which wasn’t the only surprise. He had asked a friend to record strings on the song – Drew Jurecka. He is a master arranger, so he wrote the part and had it recorded. He does all Dua Lipa’s tracks, so needless to say, it sounded insane. Again, the tears fell. I’m so happy this song got the heart it deserved in all the processes of writing and recording it.

Accompanying the single, is a beautiful music video directed by Lindsey Blane, that follows both Danielle and Drew walking through Vancouver, a simple yet powerful visual that captures the speed at which life goes on around you.

by SPILL NEWS on April 30, 2022
METRIC ANNOUNCE NEW ALBUM FORMENTRA AND VIDEO FOR “ALL COMES CRASHING” THE DOOMSCROLLER TOUR STARTS THIS AUGUST “All Comes [...]