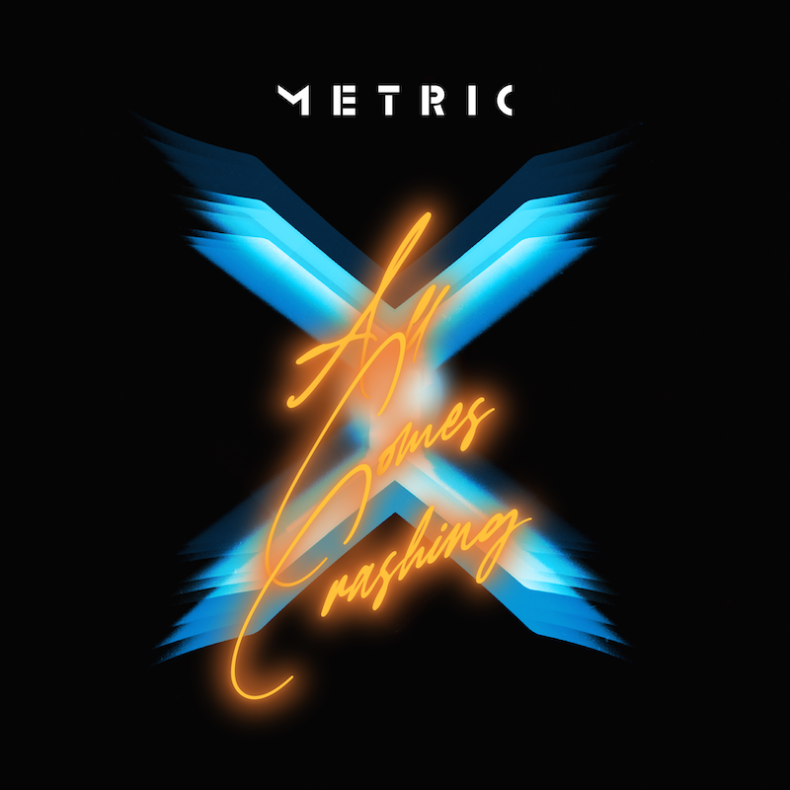 THE DOOMSCROLLER TOUR STARTS THIS AUGUST

“All Comes Crashing” is the first offering from Metric’s upcoming eighth studio album, Formentera, set to release on July 8th. “Not everyone has a conventional life with conventional relationships,” says front woman Emily Haines. “All Comes Crashing” is a love song that goes beyond romantic love, it’s an expression of solidarity with whoever it is you would want to have beside you in the event of catastrophe. It might be your best friend, it might be your blood brother or your dog. The song is dedicated to those you consider your family, whatever that looks like for you.” The words ‘This Is What Happened’ flash across the screen in the video, and have come to serve as the band’s motto as they reckon with the events of the last few years—a band at its peak of creative power attempting to decipher the turbulent world around us, with Haines positioned like a lightening rod in the midst of it, emerging with a fresh new album that sounds like essential Metric.

The band will be hitting the road on a North American headline tour, The Doomscroller Tour, set to kick off this August in Victoria, BC with stops in 39-cities, including a very special hometown “Night of Summer” show August 26 at Budweiser stage in Toronto, with support from Interpol, Spoon and Bartees Strange. The Juno award winning band have also been selected to perform on May 11 at the Massey Hall Songwriter’s Circle hosted by Tom Power and broadcast live on CBC. The complete list of Doomscroller Tour dates are below. Metric has partnered with PLUS1 so that $1 per ticket goes to supporting War Child and their work to empower children and families in communities affected by war throughout the world.

“We’re crafting a set list based on fan favorites including deep cuts from Live It Out and Old World, and it’s been wild to see how the new songs from Formentera flow with the classics from Fantasies and Synthetica,” says Haines. “…I want Metric fans to have the best concert experience possible and feel like they got to escape into another reality with us for the evening.”

SPILL NEWS strives to keep our readers up to date with news and events in the music industry. We keep you informed of the most recent information regarding new releases, tour dates, and information items about your favourite artists.
RELATED ARTICLES
bartees strangedear rougeinterpol