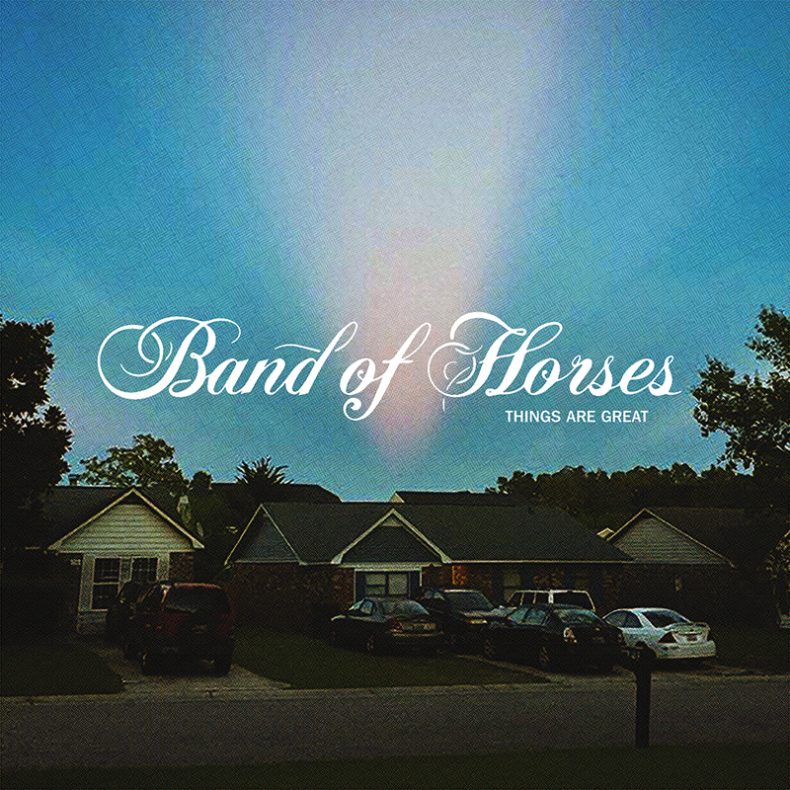 Band of Horses are announcing their sixth studio album and their first record in more than five years, Things Are Great which will be released January 21, 2022 via BMG. Sonically the album is a return to their earlier work and the kind of raw ethos that lies at the heart of Band of Horses. The album is available for pre-order HERE.

“Crutch”, the first single from the album is out today and an unguarded first look at what fans can expect. With as much symbolic iconography as a Frida Kahlo lithograph, “Crutch” is a gorgeous, guitar-driven masterpiece which captures exactly why they are still one of the most important bands of their generation.

Band founder Ben Bridwell tells us, “I think like a lot of my songs, ‘Crutch’ starts with something from my real life. Obviously ‘Crutch’ means some of the things that I was dependent on. My relationship for one. I think I wanted to say, ‘I’ve got a crush on you,’ and I thought it was funny how relationships also feel like crutches. I feel like everybody has had a time when nothing goes right and you still have to carry on. I think that feeling hits you in this song even if you don’t know what the specifics are.”

This time around Bridwell took a bigger role in production than he ever has previously, producing or co-producing every song on the album. He brought in old collaborators including Grandaddy’s Jason Lytle, Dave Fridmann, and Dave Sardy, but it’s not just old friends who were able to help Bridwell achieve the sound he envisioned. For the first time he worked with engineer Wolfgang “Wolfie” Zimmerman. The two had an instant connection which can be felt throughout the record.

Emotionally intense, both on a personal and elemental level, the songs for the most part were written before the world shut down, when all of us were faced with our own mortality and began to take stock of our lives. Here we find Bridwell more autobiographical than he’s ever been on record detailing the nebulous frustrations and quiet indignities of relationship changes and what a person will do to make things right. And what you do when you can’t.

Band of Horses have been making their mark on the festival circuit this summer, playing Lollapalooza, Firefly and Austin City Limits this last weekend. They go straight into 3 nights of intimate shows at Brooklyn Made starting October 18th before continuing their U.S fall tour. All tour dates are listed HERE.

by Dan Kennard on March 4, 2022
Band Of Horses Things Are Great BMG A lot of people know the feeling: a band or artist you’ve been following for a while has announced a new project—coming soon!—and you’re filled with excitement and anticipation, hoping that they still have the [...]

by SPILL NEW MUSIC on December 14, 2021
BAND OF HORSES ANNOUNCE NEW ALBUM RELEASE DATE | THINGS ARE GREAT NOW OUT MARCH 4 BMG Band of Horses announce that they will be shifting the 2022 release date for their forthcoming album, Things Are Great, to March 4 via BMG. Band founder Ben [...]

by SPILL NEW MUSIC on November 30, 2021
BAND OF HORSES SHARE NEW SONG “IN NEED OF REPAIR” | NEW ALBUM THINGS ARE GREAT OUT JANUARY 21 BMG Band of Horses have shared “In Need of Repair”, the latest song to be revealed from their forthcoming album. “In Need of Repair” showcases band [...]
8.0

by King Dawit on January 18, 2019
Crane Like The Bird Crane Like The Bird Independent After years of stacking up his resume, Kyle Crane has the spotlight. After touring with artists such as Neko Case and M. Ward, as well as appearing in the film Whiplash as the drum double, [...]