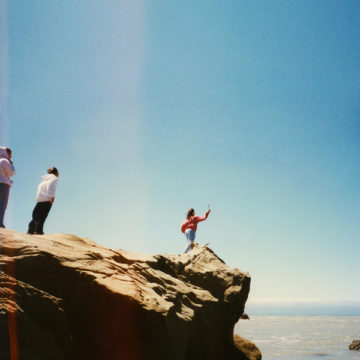 After years of stacking up his resume, Kyle Crane has the spotlight. After touring with artists such as Neko Case and M. Ward, as well as appearing in the film Whiplash as the drum double, Crane—like the bird, as he notes—is finally releasing music under his own name. On his debut album, he takes the listener inside his brain in an examination of nostalgia and innocence, better times, and worse.

On Crane Like the Bird, Crane revisits the loss of his father Jeff, a Coast Guard lieutenant from Humboldt Bay, CA, whose helicopter went down in a 1997 search-and-rescue mission. Throughout the album, Crane revisits old memories and explores how the loss affected his family. On the album cover, we see Crane’s mother throw a rose out to sea, at the crash site on the cliffs of Mendocino.

Crane is joined by a plethora of names, including Peter Moren (Peter Bjorn and John), Conor Oberst, and jazz pianist Brad Mehldau, in a collection of songs as diverse as the names on the album. The album opens with the fast, atmospheric “Wishing Cap’, where we’re offered nostalgic treats in lyrics such as “found a shoebox/in your room” and “filled with letters/anything to feel close to you forever”. We’re digging through a personal tragedy, and while the music is energetic and happy, the lyrics tell a different story. It’s as if Crane is telling us he’s okay, while he’s suffering inside.

Later, this juxtaposition becomes more defined with the album’s highlight, “Glass Half Full”, where Moren sings “Every morning I wake up/I’m not the same as I was before”, in contrast to the catchy synth beat. The backing vocals also belie the lead part, with Crane’s declaration that “You’re talking to a glass half full”. The sensation of losing part of yourself, and trying to live without the missing piece, is prevalent throughout the album.

Crane is able to balance the more poppy tracks—including an honest and touching tribute to his sister in “Nicole”—with the slower, more melancholy ones. ”Now” sounds like it could have been made by Brian Wilson and Phil Spector. At this point, the album begins to evoke the sense of nostalgia that an adult would feel while reading a childhood diary. For a brief moment the song stops and the key changes, as if to ponder the current moment, and the innocence that is lost to time.

There is a wide variety of instrumentation. The aforementioned “Now”, for example, contains lush horns and vibraphones, while “Grizzly Creek Redwoods State Park” feels like a trip up north, telling its story with a guitar and bass reminiscent of Gordon Lightfoot which reminds the listener of the park’s tall trees and endless canvases of leaves. This song has no lyrics, because they are unnecessary. “Kaleidoscope”, which is almost ten minutes long, transitions from a tribal dance into an emotional coda led by Mehldau’s keys.

In his lyrics, Crane doesn’t rely on clichés, instead taking a confessional tone, going through childhood memories, different emotions, and different times. We’re given a window into a time when everything was okay, the tragedy, and the aftermath. We’re given vivid hints of this story, this tragic moment from Crane. And yet the album is a way of coming to terms with it. I can’t comprehend what Crane and his family went through, but this is the closest I’ll get. The drums echo on the grand finale of this journey into Crane’s subconscious, these memories he’s stored away for some time, given a front seat to the show.

King Dawit considers himself the Psychedelic Cowboy. Raised on The Beatles, Queen, The Rolling Stones, and Crosby, Stills, Nash, & Young, you will never find Dawit listening to the same thing two days in a row, whether it be '70s progressive rock or late '60s Baroque pop. Dawit is also a Toronto-based writer, filmmaker, and music producer. Among his favourite writers are Hunter S. Thompson, Terry Southern and Lester Bangs.
RELATED ARTICLES
album reviewalbum reviewsband of horses
8.0