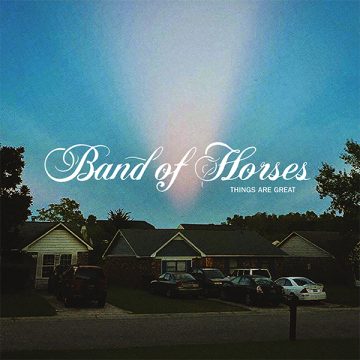 A lot of people know the feeling: a band or artist you’ve been following for a while has announced a new project—coming soon!—and you’re filled with excitement and anticipation, hoping that they still have the thing, the ‘it’, that made you take to them so passionately in the beginning. Band of Horses is one of those bands for me, and after losing two members to solo careers and more personal interests back in 2017, along with a five-year break between albums, the excitement and anticipation was mixed with equal parts nervousness and worry that perhaps their best days were behind them. Way back in 2007 their album Cease to Begin put them firmly on the map of emerging indie-rock outfits, and they followed it with Infinite Arms in 2010, a release that solidified them as a top-tier indie band, deserving of headlining positions at festivals and sold-out shows. 2012’s Mirage Rock and 2016’s Why Are You OK? had a lot to live up to, and for many people those projects just weren’t quite at the level of their preceding work despite some great tracks and singles from them. Now, here we are in 2022 with the highly anticipated release of Things Are Great and I am happy to report that things are, indeed, great again for Band of Horses.

The first track, “Warning Signs,” opens with the shimmering guitar and lead-singer Ben Bridwell’s clever lyricism that has defined the band for a while now, singing, “Small talk with a registered nurse/not to cry in front of people at work/that’s hard, hard, hard, at times, you know” before it soon advances to a cantering drumbeat and into the big sweeping builds that made their earlier work so powerful and charming. The lead single “Crutch” is faster, but catchy, and leads into another stellar song “The Tragedy of the Commons” that comes in at nearly five minutes. It’s the longest track on the album, but is perhaps the most interesting, dropping into a Pink Floyd-esque instrumental shift about three minutes in that leaves space for the rising, shimmering guitar and drums to slow and expand. After that comes “In the Hard Times” and “In Need of Repair”, the latter of which is yet another early single and equally exquisite track. Many of the titles here, including the album title itself, can push you to listen through the lens that this is in some way a pandemic album, and you will find oblique references to it in many songs, but if you don’t listen through that lens, nothing is lost by it. What you have instead is a collection of incredible songs, arranged well into a cohesive and impressive new release.

At seven tracks into the ten, it’s at this point that one might realize Band of Horses have returned to something reminiscent of those earlier days, re-invigorated by the hiatus, and in some ways getting back to the big, lush songs that established them years ago. The great songs just keep coming, one after the next, and they are each beautiful and big and full of the tragic optimism and underlying sense of sorrow that makes Band of Horses such a powerful band. It’s good to have them back at the top of their game.

Dan Kennard is an English teacher and fiction writer living outside Kansas City, Kansas where he lives with his wife and children. More about his work can be found at amazon.com/author/dankennard. You can also follow him on Twitter and Instagram @kennardistry or contact him at [email protected]
RELATED ARTICLES
album reviewalbum reviewsband of horses
8.0