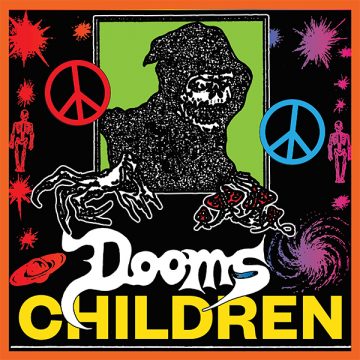 Wade MacNeil’s post-Alexisonfire creative output continues to demonstrate a wide range of performance and songwriting. Following the release of his original score for the 2020 slasher film Random Acts Of Violence, MacNeil is back with his latest solo project, Dooms Children, and its self-titled debut album.

Dooms Children comes to a surprising start with “Trip With Me”. With a lengthy instrumental introduction section featuring vintage organs, rhythmic bass, and weaving guitars, dueling in a call and response fashion, “Trip With Me” sounds as if it was pulled straight from the summer of love. MacNeil’s thin and raspy vocals add to this element along with the songwriting which feels reminiscent of the likes of Santana, The Rolling Stones, and The Grateful Dead. Ripe with atmosphere, the song is a complete jam that sets the tone for MacNeil’s latest creative venture. The same could very much be said for the following track, “Flower Moon”, a hazy, down-tempo ballad that revels in melancholy with a building sense of intensity that grows until the song bursts at the seams into an explosive chorus and jaw-dropping guitar solo.

While largely based around the sounds and stylings of classic rock, psychedelia, and the blues, Dooms Children is an inspired collection of music that finds balance between modernity and vintage. There are elements of shoegaze (“Skeleton Beach”), country (“Spring Equinox”), and singer-songwriter/folk (“Heavy Heart”, “Chinatown Glow”), making for a rich and unexpected collection of material. Vocally, MacNeil is flexing a sense of melodicism previously unknown that adds a level of vulnerability to the music and the lyrical subject matter. Furthermore, his guitar very well may never have sounded better than on this record; his tones are exceptional, dipped in carefully curated reverbs, fuzzes, wahs, delays, and more while his performance is at its most soulful, making for a truly powerful combination. In addition to the first two tracks, the bluesy “Lotus Eater” with its doomy, sludgy, Black Sabbath conclusion, and “Friend Of The Devil” are must-hear songs.

If anything is clear from Dooms Children, Wade MacNeil has far more to offer as a creative force than Alexisonfire may have suggested. The songwriting throughout the 11 tracks is arresting as MacNeil bares his soul with an emotive musical performance that builds upon the intimate and autobiographical lyrical content. Dooms Children is a stunning record that, at its core, is a creative exercise in stylistic experimentation and performance, which ultimately leaves the album feeling emotionally raw and not without danger. Digging deep to deliver a stellar and soaring performance, Dooms Children is MacNeil like you’ve never heard him before.

A passion for music has always been a part of Gerrod’s life. As a young boy, he was raised on a steady diet of the music from The Chili Peppers, Aerosmith, The Stones, Prince, and others from his mum. Raised in the GTA, Gerrod continued to foster his love for music by attending a wide range of concerts and learning the drums. His unapologetic passion for music has no bounds and has spread to a wide variety of styles, whether it be the 90’s rock that sound tracked his teenage years, the jazz he studied in university, or his newfound love for hip-hop. He recently received his bachelors in music and education from York University and is passionate about writing and reviewing good (and less than good) music. Gerrod is also the drummer and songwriter for a Toronto based rock & roll band, One In The Chamber.
RELATED ARTICLES
album reviewalbum reviewsalexisonfire
8.0