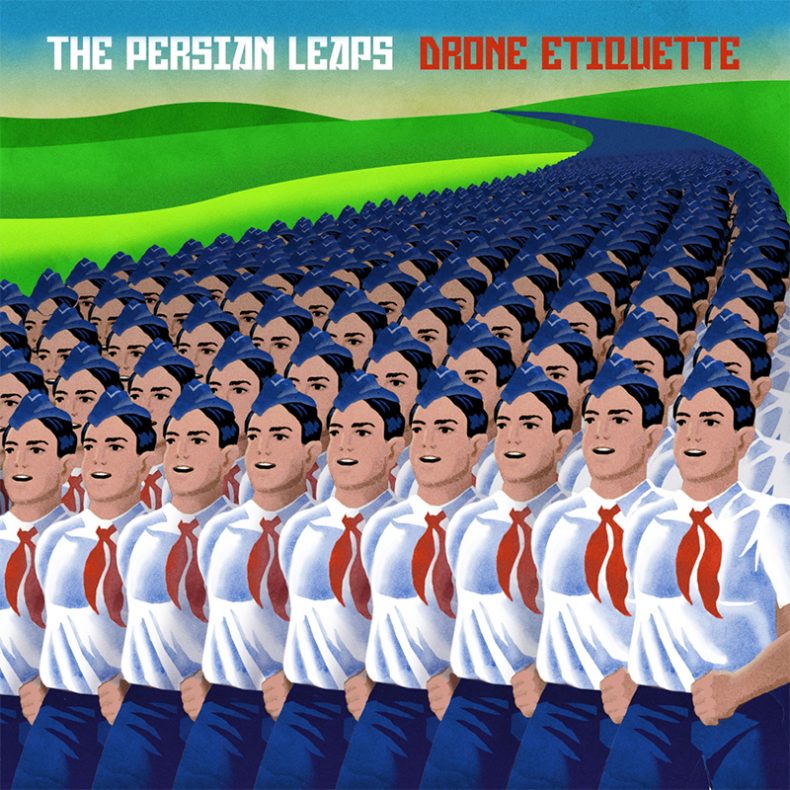 It’s great when a band can tick so many boxes at once on your ‘love list’. Take the Twin Cities-based project The Persian Leaps for instance – there’s something for everyone here (well nearly, fans of solely one genre distant from their offerings may beg to differ). A little bit of R.E.M., a little bit Lemonheads. A dash of The Smiths, a hint of The Replacements. They appeal to fans of Throwing Muses and Tom Petty equally. They are the all-reaching, down to earth, good American indie rock that so many seek.

Yet they question authority and systematic oppression and authoritative stupidity, so I guess they are one up on so the mass swarm of senseless songs out there. Now they’re back with a new single, called “Sweeps”, teasing their Drone Etiquette LP, just as “When This Gets Out”, a song born of frustration during the Trump presidency, had done recently.

The long-player will be released on October 1 via Land Ski Records. This time around, they are no longer a full band but surround principal songwriter, vocalist and guitarist Drew Forsberg. You would never know otherwise if we hadn’t told you – the full band sound is definitely all here still and it is great as the band continues The Persian Leaps’ tradition of churning out power pop tunes that would have crowned any 90s college rock station. An eternal sound, just as powerful today.

“The song “Sweeps” uses the television industry as a metaphor for desperation and failure. I started with the main riff and these lines and then built a song around them: They decided when we leave / They’ll put the whole thing on TV / And the ratings will determine our return. I’m not sure if it still matters during the streaming era, but “sweeps week” was a period when broadcast television networks would go all-out to achieve the highest possible ratings so they could charge more for advertising. “Sweeps” inspired some cheap, crazy, desperate stunts over the years – like the “Happy Days” episode where Fonzi jumps over a shark on water skis, which led to the phrase “jump the shark,” says Drew Forsberg.

“The exact subject of the song is open for interpretation. I wasn’t thinking about a romantic relationship when writing this song, although you could certainly interpret it that way. Usually, however, these things are about the band and my struggles with success and achieving wider recognition for the Persian Leaps. That’s the story I’d like to go with — “last release, we were on top of the world but this time around, things aren’t going well and we’re one bad review away from cancellation.” Of course, we were never actually on top of the world, and the new EP is FANTASTIC, but I’m entitled to take some artistic license. Nevertheless, just to be safe, buy Drone Etiquette and help send our ratings through the roof.”

The Persian Leaps released the Electrical Living LP in 2019 and the Smiling Lessons EP in 2020 together with Jon Hunt, a musician and graphic designer who did the cover artwork for most of the band’s releases to date. During the 2020-2021 pandemic, Forsberg recorded this 6-song Drone Etiquette EP as a solo effort, primarily due to lockdown limitations.

As of September 17, “Sweeps” will be available exclusively via Bandcamp, where the lead single “When This Gets Out” can already be found. On October 1, the full Drone Etiquette album will be released on CD and online platforms, including Apple Music and Spotify. It is already available for pre-order via Bandcamp.

Enjoy the two latest singles, including this album’s lead track and “Your Loss” from their previous ‘Smiling Lessons’ EP:

by SPILL NEW MUSIC on September 16, 2020
THE PERSIAN LEAPS – SMILING LESSONS A SPILL EXCLUSIVE EP PREMIERE The time has finally come for the release of the latest sonic delight from indie rock power pop outfit The [...]
7.0

by Dan Kennard on October 4, 2019
The Persian Leaps Electrical Living Land Ski Records The Persian Leaps have put something out each fall since 2013, and just as sure as the leaves will change and everything [...]
10

by Anthony Pedroza on October 12, 2018
The Persian Leaps Pop That Goes Crunch Land Ski Records I’m super pissed, I should have heard of The Persian Leaps years ago. It’s okay though, because they have cleverly [...]