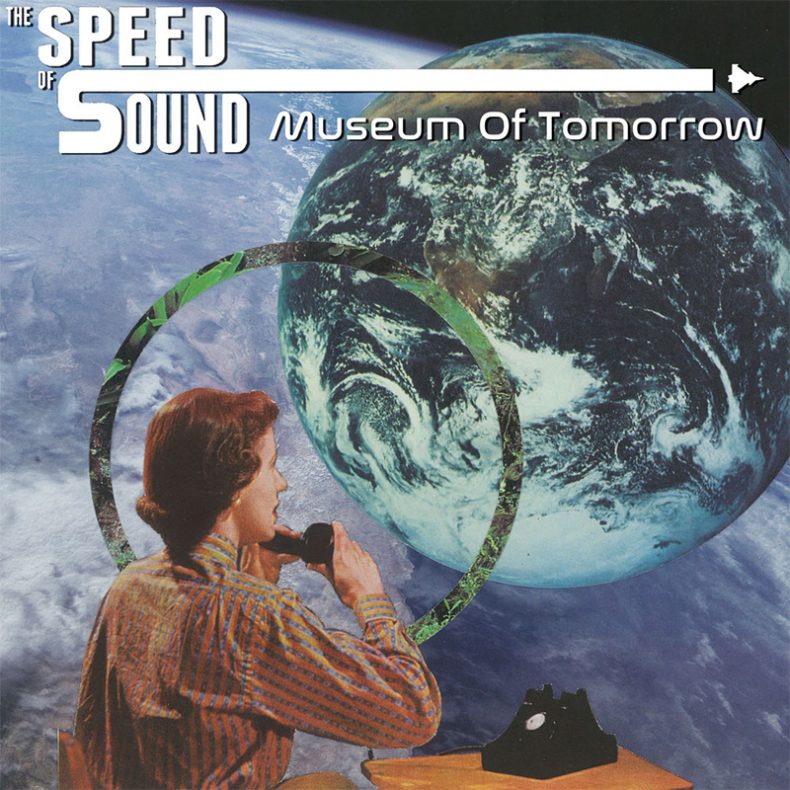 THE SPEED OF SOUND – “MUSEUM OF TOMORROW”

It is certainly the year for bands with a 20- or 30-year legacy behind them coming out of the woodwork once again. Perhaps it is due to a year of sitting around due to Covid lockdown policy or perhaps these reunions were long in the works. Whatever is causing this to happen and we are on this bandwagon full spree. So much music has been produced by artists who have not released anything in a while, as well as those who are just so prolific (but with that legacy) that yet another release from them can only be seen as a gift to this strange world.

Manchester-based eclectic power pop/indie rock music veterans The Speed Of Sound number among artists with deep roots and Friday brings the release of their fifth studio album Museum of Tomorrow. 32 years to the day the band issued their debut EP back in 1989, the will release this album on CD and Deluxe LP via California’s Big Stir Records – a label certainly known as a champion of indie/ college rock and power pop artists left and right.

If the past few decades have shown anything, it’s that The Speed of Sound is both resilient and continually inspired. One other key takedown lesson from this album in particular is that their creative explosion is definitely worth it. Loaded with songs and with style beamingly reminiscent of such artists as Pylon, The B-52s and Television rolled in one, there is enough Bangles and Lene Lovich here as well to prove that The Speed of Sound are experts in balancing a raw and edgy sound with a guiding and invigorating sense of melody.

Ahead of this, the band reveal the lead track “Tomorrow’s World” as a sweet taster of what’s in store for listeners, along with an animated video. The entire 21st century seems to have been mis-sold. This song is a cry of anguish and a re-statement of what should have been. Twelve multilayered synthesizer tracks recreate a flying saucer landing at the end and the ultra-depth in the sound is from bowed bass on the verse-ends and pre-chorus.

From the opening line “We were offered Star Trek, but they fed us Soylent Green” – which is etched into the vinyl – science fiction abounds within the music, positioning The Now simultaneously in the Future and in the Past. We all exist on the edge of forever.

To date, The Speed of Sound has released eight singles via Big Stir, but “Museum of Tomorrow” is an all-new experience. While each of these 13 new songs could have been a single, they are gathered in an organically homogeneous collection, showcased within the ‘Museum Of Tomorrow’. This is an album made manifest by and for people who like albums.

This is future retro modern music, rooted in a definite 60’s influence but with an 80’s twist. Influenced by The Byrds, Small Faces, The Chords, Siouxsie & The Banshees and XTC, with female and male vocals, The Speed Of Sound merges the power of punk with the floating harmonies of The Byrds. Their sound and alphabetical order places them between Sonic Youth and Dusty Springfield.

The Speed Of Sound formed in Manchester in 1989 with a pre-history dating directly back to the day Andy Warhol died in 1987. Dwelling deep below the ‘music industry radar’ has allowed for the evolution of their own distinct sound, their live act often described totally differently with comparisons from The Stranglers and Television to Jefferson Airplane and The Who.

The Speed Of Sound has continuously produced music that is optimistic and with lyrical bite, a punk-inspired DIY ethos and lust for experimentation rooted in psychedelia. While players have come and gone, the current lineup has largely been the same for four years, including father and son John Armstrong (guitars and vocals) and Henry Armstrong (keyboards), Ann-Marie Crowley (vocals and guitar), Kevin Roache (bass guitar) and John Broadhurst (drums).

On September 17, the Museum of Tomorrow LP will be released digitally, on CD and limited-edition 170g heavy weight vinyl with a choice between black and glorious colour. Vinyl orders include a 16-page full-colour A5 printed Exhibition Guide containing lyrics, full-colour inner sleeve, a separate picture insert, a sticker, a pair of badges/buttons and a bookmark. The album can already be pre-ordered in all formats from the Big Stir website at https://bigstirrecords.com/album/1910197/museum-of-tomorrow