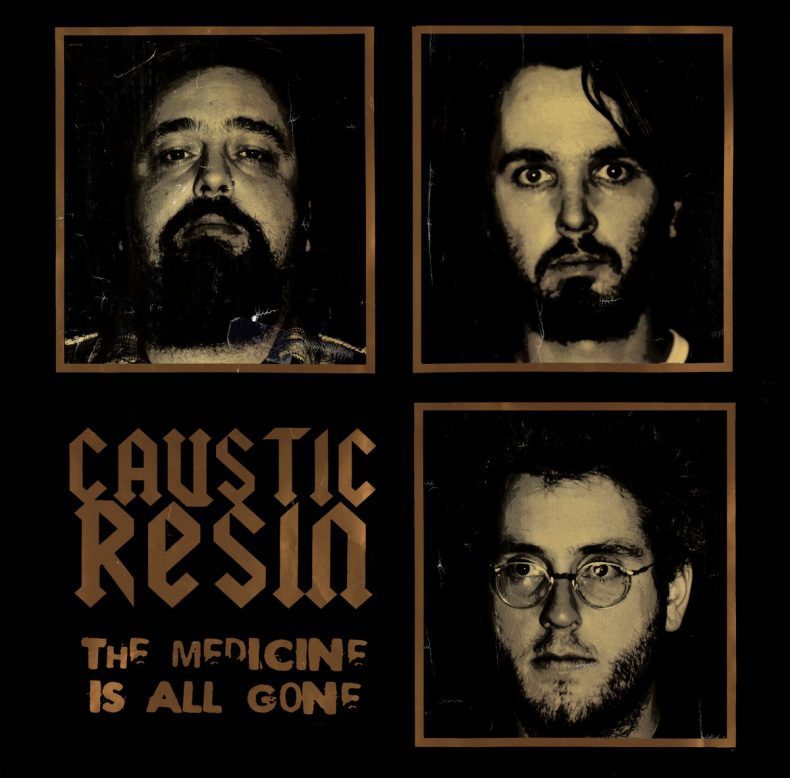 90s heavy psych band Caustic Resin announce the deluxe reissue of their celebrated 1998 album The Medicine is All Gone today with a stream of the album track “Niacin”. The double LP reissue is the album’s first time ever on vinyl remastered from the original analog tapes.

Caustic Resin vocalist/guitarist Brett Netson is also a longtime member of indie rock heroes Built To Spill and currently plays in drone legends Earth as well as fronting his own Brett Netson and Snakes.

Recorded in 1998 with engineer Phil Ek (Fleet Foxes, Modest Mouse, Mudhoney, Built To Spill, The Shins, Band Of Horses), the album was a highpoint both sonically and in terms of songwriting in the 15 year career of the Boise rock trio. Initially released on Alias Records, after many years of the album’s high repute passing, largely by word of mouth, from devoted fans and record store clerks to, well, anyone who would listen, the calls and campaigns for this landmark album to be released on vinyl have finally been heeded.

The album is an intoxicating ride through the heaviest of psychedelic trips, its avalanche of layered guitars cascading into fathomless waters of calm respite before the white knuckle ride rises again and again. Its vocals and lyrics sound as though they are the last gasp scream uttered by a man who stands at the precipice of his own mortality. And indeed he might have been.

In 1998 Caustic Resin had been around for 10 years and their longstanding line up of Brett Netson (vocals and guitar) Tom Romich (bass) and James Dillion (drums) had all but burned itself out with its dedication to rock n’ roll and the worst aspects of the associated lifestyle. Their drugged out sound was one dictated by experience not secondhand inspiration.

The Medicine Is All Gone stands as a unique entry in the canon of stoner rock and makes much of its fellow alumni seem tame in comparison. It is an astonishing achievement when judged solely on its musicality, but, as an end product, it is nothing short of a miracle when considering the mental illness, addiction, homelessness and criminality issues its makers were facing around the time of its construction. The explosive, violent chemistry of the trio that produced this classic music would sadly never issue a full album’s worth of material again.

The Medicine is All Gone will be available on 2xLP and download on September 9th via Scavenger Cult Records.

“Caustic Resin made a bunch of great f***ing records and The Medicine Is All Gone was one of their best. The riff (and everything else) of the lead track ‘Cable’ is from one of the finest songs not only of 1998, but ever. You need this record.” ~Dylan Carson (Earth)

by SPILL NEW MUSIC on June 28, 2016
THE STROKES RELEASE NEW MUSIC VIDEO FOR “THREAT OF JOY” Cult Records The Strokes’ reveal a brand-new music for “Threat of Joy.” Drawn from [...]