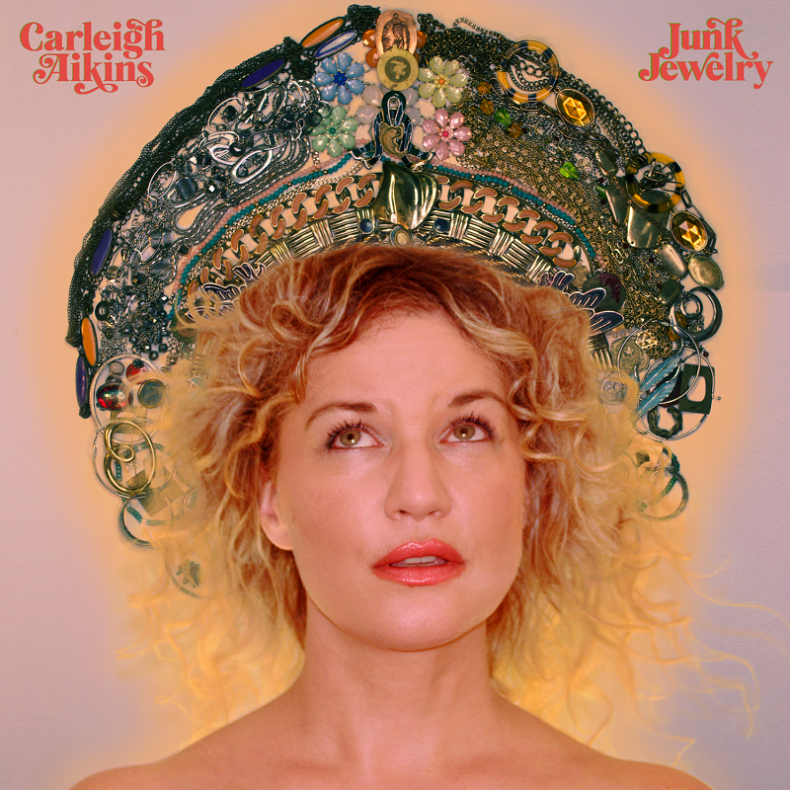 After years of touring and performing on world stages as a supporting band member, or the shiny pretty thing standing in the shadows of prominent artists as a backing vocalist, Carleigh Aikins finally emerges to reveal herself as a true Canadian vocal treasure worthy of the spotlight on her debut solo album Junk Jewelry (out December 3 via SilverDoor Music).

Working with producer/engineer/mixer Marcus Paquin (Arcade Fire, The National), as well as Don Kerr (Bahamas, Ron Sexsmith), Evan Tighe (Patrick Watson, La Force. Elisapie), Brad Barr (The Barr Brothers), and an array of Montreal and Toronto’s finest musical gems, Aikins offers this eclectic collection of tunes which draw from the varied influences and flavours of rock, soul, and pop echoed in the sounds of the many bands Aikins has been a part of.

Junk Jewelry offers a landscape of Carleigh’s diverse vocal range and ability – from her tender vibrato to her distinctive and explosive vocal fry. It serves not only as a landmark of her prowess as a backing vocalist (she performs all the countless layers of BGV’s on the album), but as a powerful front-woman in her own right.

“The themes found in my song ‘Good Book’ stem from my own upbringing in the Canadian Catholic School Board education system. But the song is also born from a past relationship with someone who was living a ‘double life,’ largely due to their repressive upbringing being homeschooled under Christian curriculum and morals/values.

While my partner was struggling with defining their identity (which was manifesting through severe addiction), I was confronted with my own issues revolving around these same things. My partner was suffering and acting out on a ‘more severe’ level; while I was struggling in a more ‘traditional’ sense with society’s normalization of drinking alcohol and making bad decisions.

The lyric ‘I’m not the Sinner, no, I’m working on my Halo. Now you’re the Sinner ’cause the Good Book says so’ was born from passing the blame to my partner for allowing his addictions and “sins” to get further out of control, even though I too was struggling. I was tending to his destruction while telling myself I wasn’t as far gone as he was – but we were both manifesting our pain through different forms of self-destruction and dysfunction (which, in the eyes of the Bible, were sinful and therefore we should be ashamed of ourselves).

This song is released at a moment when the Catholic Church (in particular) should be examining itself and the restrictive ways in which it imposes its views of ‘good and evil’ upon its congregations. Currently, the Catholic Church continues to condemn same sex marriage while covering up sexual abuse and protecting predators within its institutuion. Finally, the truth is being uncovered as demands have been made to investigate and excavate the several thousand (and counting) Indigenous children found buried in unmarked graves on the sites of Canada’s many Residential Schools (the last one only being closed in 1996). The hypocrisy with which the Church operates is extremely questionable- as echoed in the song … Who really is the sinner in all of this?

‘Good Book’ was first demoed in Colorado while I was writing with my former band Paper Bird. My friends from the bands Zeus, Brave Shores, Wax Atlantic and Ocean Potion took my rudimentary demo to a new level as we rehearsed and workshopped it later in Toronto. I presented it to Marcus Paquin, who agreed to produce it at Studio Mixart in Montreal. He listened intently to it and on the day of pre-production said ‘this song needs to be a party anthem.’ He brought a new urgency to the vibe of the song, which I found fitting, since it stemmed from a response to a lifestyle of ‘parties and sins.’ Evan Tighe (drummer for Patrick Watson) brought such infectious grooves to it, in tandem with Marcus’ impeccable in-the-pocket bass playing and Pietro Amato’s proficient delivery on keys. The song maintained its influence from the earlier demo’s, yet was given a new energy. It’s become possibly my favourite song on the record.

I’m currently spending countless hours making stop-motion halo’s and religious imagery/symbology to integrate into the ‘Good Book’ official music video, which will debut in the early new year. For now, I’ve made a lyric video that features hundreds of frames of photos of myself looking simultaneously angelic and strung out.”

SPILL FEATURE: TAKING A SONG THAT WE LOVE AND DRESSING IT UP IN A DIFFERENT OUTFIT – A CONVERSATION WITH NICK ROSE OF DWAYNE GRETZKY

by Jamie Lawlis on October 16, 2019
TAKING A SONG THAT WE LOVE AND DRESSING IT UP IN A DIFFERENT OUTFIT A CONVERSATION WITH NICK ROSE OF [...]