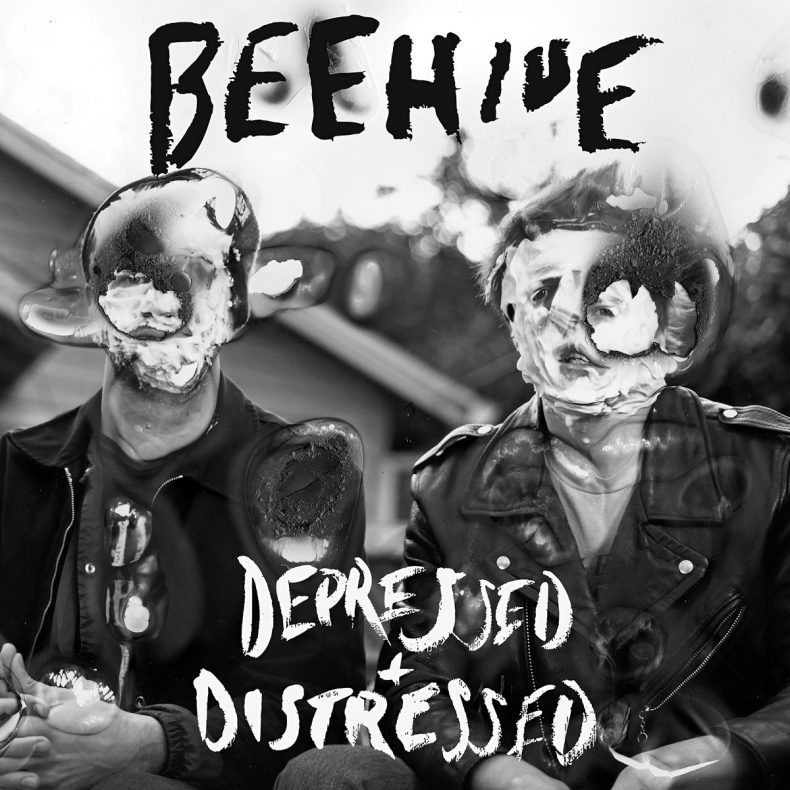 The Northern California duo writes short, deceptively simple rock songs in the vein of early Wire, Suicide, The Spits and Television Personalities. Each song seems laser-focused on a desperately repeated vocal phrase and repeatedly hammered riff splayed out over the emotional indifference of a Hammond Auto-Vari 64 drum machine.

Vocalist/guitarist Jake Sprecher — who also played in Terry Malts (SF), Smokescreens (LA) and Business of Dreams (LA), all part of Slumberland Records family – urgently yelps and howls desperate and angry lyrics like a man with no time to waste. Bassist Bud Amenti (also of Shutups) fills in any gaps with subtle walks and fills while holding down the band’s monolithic sound. Beehive never stop the drum machine during their live set, there are no breaks, which adds to the intensity.

Beehive came into existence at the beginning of 2019, but in that short time has been hitting venues hard up and down the West Coast to set up their 7-song debut EP Depressed + Distressed for release in early Fall. The EP was recorded live in the studio in one take to 1/2″ tape. No messing around.

Depressed + Distressed opens with a short intro (“Tick Tock”) leading into the mantra-like wail of “Get Off My Back,” as the duo holds and pummels an A-major chord, as Sprecher chants over the top. Elsewhere, “90’s Trash” sarcastically rips up nostalgia for music of our youth and disposable culture. “When Can I See You Again?” seethes with desperation and obsession we’ve all experienced at some point, the guitars clattering and clawing, perhaps trying in vain to stop the incessant drum machine. “Wasting Our Time” wastes no time getting to the point: Our time, our lives, as a measure of existence, is only wasted by ourselves and each other. Kind of heady and deep, but utterly simple.

Depressed + Distressed will be available on 10″ EP and download on September 6th, 2019 via Jester Records. Preorders are available HERE.

Quote About the Song

Vocalist/guitarist Jake Sprecher had this to day about the song: “Sometimes a really basic romantic rejection can manifest itself cumulatively, creating that ugly feeling of wanting to give up forever. If you’ve ever been stuck in that sort of thought pattern in the middle of the night, that’s ‘Don’t Try.'”