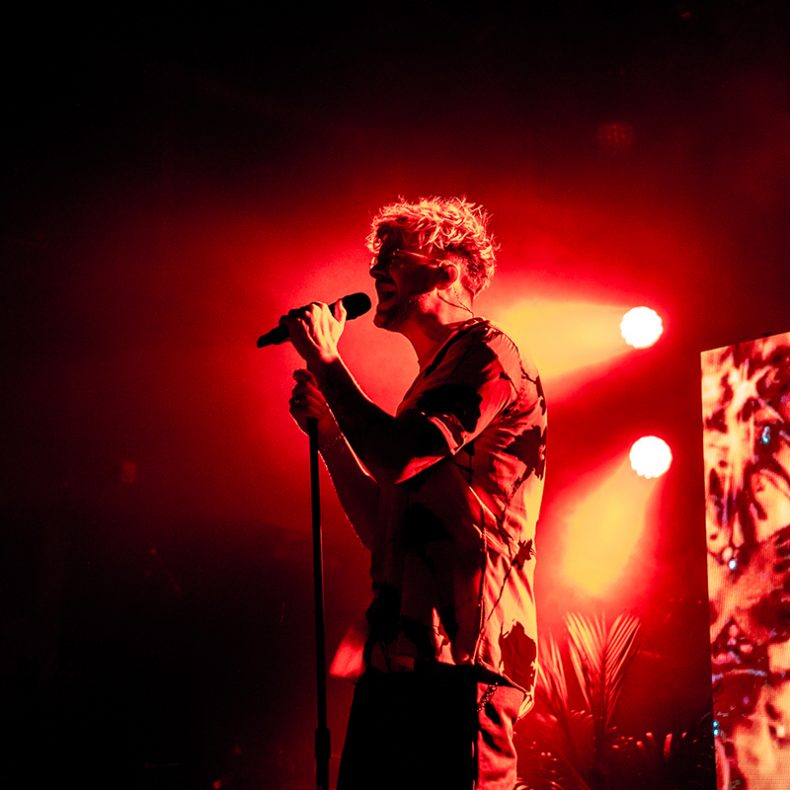 Virginia To Vegas is always about having a good time, and that is exactly what everyone had at tonight’s performance at the Mod Club Theatre. As the lights dimmed, the audience was hyped for the Toronto-born singer. He appeared onstage a little after nine, a glass of wine in his hand. He began the set with his latest single, “Just Friends,” as he sang passionately about a guy wanting to be more than just a friend to the girl he is in love with.

What energized the crowd most was his performance of “We Are Stars.” Instead of playing its original version, the backing band performed a more upbeat one, which included a breakdown where the audience starts to bop their heads as it begins. At any time, Virginia To Vegas could be seen jumping around, grooving to the music, and engaging the crowd, while smiling to the audience,as well as to his family who was watching from afar.

One of the highlights of the night was a fervent, but passionate fan screaming to Virginia To Vegas about how much she loves him. He then invited her onstage while he performed his next song. After it was done, the fan excitedly asked Virginia To Vegas if she can have one of the rings on his hand. He casually gave her one, and she screamed with excitement as she walked back down to the audience. It was no doubt a moment even Virginia To Vegas never experienced before.

The singer ended the night with the song everyone was waiting for, “Lights Out.” During the bridge, he walked down to join the audience, as he connected with the fans and invited them to sing along with him. He ended the show by singing the chorus with the audience one last time. “I always feel like somebody’s watching me/So tell me when the lights go out/Tell me if it’s safe now,” he sang. Virginia To Vegas’ homecoming show was a big success, and the audience left satisfied and happy. Expect the next one to be as exciting and lively, if not more so, than tonight’s performance.

Andrew is an aspiring photographer hailing from Toronto, who is currently in his final year at OCAD University. Ever since he took pictures with his old iPhone at an Imagine Dragons concert in 2018, it began his goals and dreams to pursue a career to photograph live music, and to work in the music industry. He loves concert photography because it combines his passion for photographing memories and listening to music. His favourite genres of music are pop, electronic, and alternative rock.
RELATED ARTICLES
lights outlive reviewthe mod club theatre

SPILL FEATURE: THE NECESSITY OF THE CANADIAN SUPERGROUP – A CONVERSATION WITH BONDS OF MARA VOCALIST BRIAN BYRNE