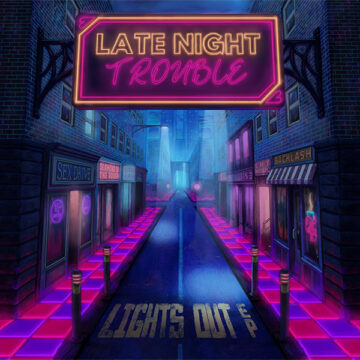 Hailing from Montreal, Late Night Trouble has dropped their long awaited debut EP Lights Out. The album follows the release of singles “Sex Drive”, “Scream My Name”, and “Diamond In The Rough” in 2021, and “Backlash” earlier this year.  With the addition of another track, Lights Out is an explosive, hard rock debut that will set Late Night Trouble apart from their peers.

Opening with the most recent single, “Diamond In The Rough” is a hard-hitting rock track that could easily be heard blasting from the radio. The riff-heavy song is led by Roxanne Paris’ melodic vocals, demonstrating a strong range in pitch and tone and oozing with character and style, and is accented by the regular use of aggressive gang vocals from the band. The band truly kicks the alum into high gear with the following song, the hard blues of “Backlash”. As one of the strongest songs on the record, “Backlash” features a swaggering riff pulled straight from the ‘70s before diving headfirst into a larger-than-life chorus.

Much like the opening two tracks, the remaining three continue to demonstrate Late Night Trouble’s worth as a great rock outfit. “Sex Drive”, for example, is a track that grows organically while introducing a groove heavy element with a more stripped-down approach in the verse, making for a definite highlight among the five songs, while “Scream My Name” very well may be the heaviest track on the record as the band leans more into a modern rock tone. The album comes to a close with the only unreleased track, “Firetrack”, yet another highpoint for the band simply for that opening riff. The song’s climatic tone gives it a victory lap feel, making it an appropriate conclusion to such a strong EP.

With production from Dave Traina (The Damn Truth) and Leon Harrison (The Lazys), and mastering by Harry Hes (Billy Talent, Monster Truck, Danko Jones), Lights Out is an absolutely massive sounding record. Additionally, CD copies of the album have come loaded with live cuts of each song, which proved to be as exciting as the studio record. Late Night Trouble has raised the bar for up-and-coming rock bands as a whole with an impressive debut record that establishes them as one of Quebec’s hottest bands to watch out for.

A passion for music has always been a part of Gerrod’s life. As a young boy, he was raised on a steady diet of the music from The Chili Peppers, Aerosmith, The Stones, Prince, and others from his mum. Raised in the GTA, Gerrod continued to foster his love for music by attending a wide range of concerts and learning the drums. His unapologetic passion for music has no bounds and has spread to a wide variety of styles, whether it be the 90’s rock that sound tracked his teenage years, the jazz he studied in university, or his newfound love for hip-hop. He recently received his bachelors in music and education from York University and is passionate about writing and reviewing good (and less than good) music. Gerrod is also the drummer and songwriter for a Toronto based rock & roll band, One In The Chamber.
RELATED ARTICLES
album reviewalbum reviewsbacklash
8.0