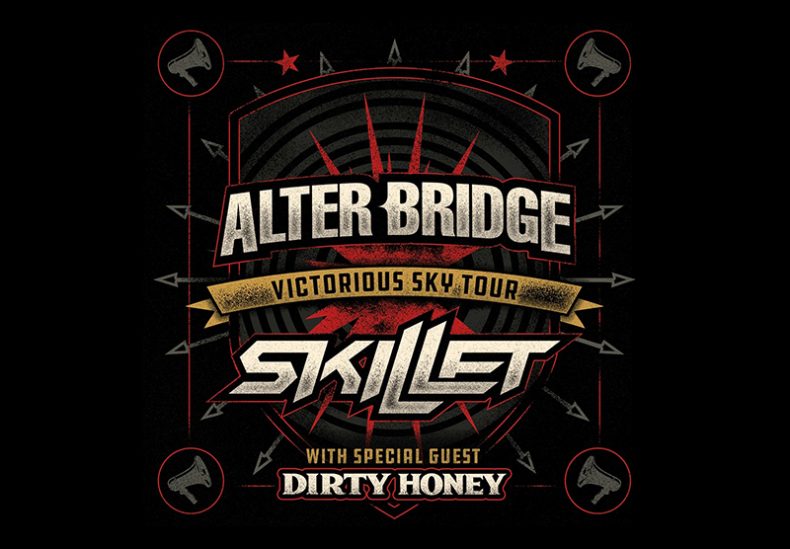 As Dirty Honey opened the show to a full house with “Scars”. After “Heartbreaker”, they directed our attention to the drum riser for a solo from Corey Coverstone that incited cheering and applause.  “When I’m Gone”, their 2019 chart-topping hit has an infectious melody that’s hard to resist. The crowd drank up an Eddie Van Halen-style guitar solo by John Notto, and clapped along with Dirty Honey on several occasion. The band was a very strong opener that effortlessly warmed the crowd. Frontman Marc Labelle, in a hat reminiscent of Ronnie Van Zant’s, made it clear that they’d be happy playing all night for the grateful, responsive, and cheerful fans,  but now it was time for Alter Bridge to shine.

Lasers streaked above the crowd creating an aquatic effect through the fog-filled venue. Alter Bridge took the stage against a backdrop of eight column-shaped screens depicting various motion graphic visuals, including artwork from their upcoming release. Throughout Alter Bridge’s set, center stage wasn’t ever solely occupied by a single guitarist. Instead Myles Kennedy, Mark Tremont,i and Brian Marshall seemed to have found a way to allow the music, and to some extent the fans, to become the focus. They took turns sharing center stage with each other and interacting with those in the front rows. “Wouldn’t You Rather” was the opener, and the familiar riff of “Isolation” rocked MYTH LIVE next. Every time, right on cue, as if pre-planned, the band would stop and the crowd would effortlessly finish the line. Mark Tremonti’s stage presence and fretwork were mesmerizing. Red backlit walls in the upper level illuminated fans along the railing, and in some places, there were fans staggered three or four bodies deep. Brian Marshall’s bass breakdown rumbled every eyeball and eardrum in the house. The bass levels rivaled most EDM festivals and rattled the air out of our lungs. Kennedy ditched the guitar for the center mic and stand, while Tremonti shredded, leaving the crowd filled with satisfaction. Thunderous applause resounded as the stage darkened. Alter Bridge capped the night off with “Open Your Eyes”, while the crowd kept rhythm. At Kennedy’ request the crowd harmonized during the bridge. The crowd applauded with arms raised, screaming and whistling in appreciation. Alter Bridge tossed out set lists, picks and drumsticks as the crowd began to chant “One more song!”, but the boys from Alter Bridge gracefully, slipped off stage.

The lights dimmed as voices and arms were raised while Skillet took the stage and broke into “Not Gonna Die”. The night’s headliners were at the top of their game. Hair flew and sweat was dripping before the first song was over. Skillet’s setlist reads like the back of a greatest hits album. Their loyal fan base can sing along with every song, and at times can nearly out-sing the sound system. The band rocked through “You Ain’t Ready”, “Whispers in the Dark”, “Legendary”, “Awake and Alive”, “Back From the Dead”, and ”Save Me”, before lead vocalist and bassist John Cooper spent some time relating to the audience about how he needs music when he’s feeling up or down, in the gym, even going to bed. He touched on struggling through life, how losing Chester Bennington of Linkin Park was especially difficult, and how music and his faith get him though. Every point he made was met with cheers then they broke into the poignant hit “Hero”. Every request the frontman made of the crowd was immediately met, seemingly before his request could even finish crossing his lips. They continued through the rest of their set with ease, energy, and power that is unrivaled. They are all smiles on stage and enjoy what they do, who they do it with, and especially who they do it for. From the stage antics, to the elevated platforms and CO2 blasts, Skillet brings their “A” game, and give their all.  They never disappoint.

Scott was raised in southern Minnesota, attended the University of Wisconsin – Stout, spent some time abroad and currently resides in Minneapolis, Minnesota with his wife and their two daughters, only son and two dogs. Long time music lover and concert-goer, Scott has attended countless concerts and festivals since 1996. His fondest concert memories include meeting the love of his life at his first music festival. Sneaking into Linkin Park’s first Minnesota show. Hosting the second stage on the Projekt Revolution stop in Somerset in 2004 and pretty much every show he’s attended with his concert cohort, Scott. Yes, there’s two of them! As of late, Scott has started making memories and sharing his love of attending concerts with his children. Shinedown was his oldest daughters’ first show thanks to his cohort, The Interrupters was his youngest daughters’ first show. His son’s first show is still to be determined.
RELATED ARTICLES
alter bridgedirty honeylive review

by Gerrod Harris on November 6, 2020
Alter Bridge Walk The Sky 2.0 Napalm Records Having released Walk The Sky last year, Alter Bridge embarked on a short-lived North American tour in January and February of this year. [...]