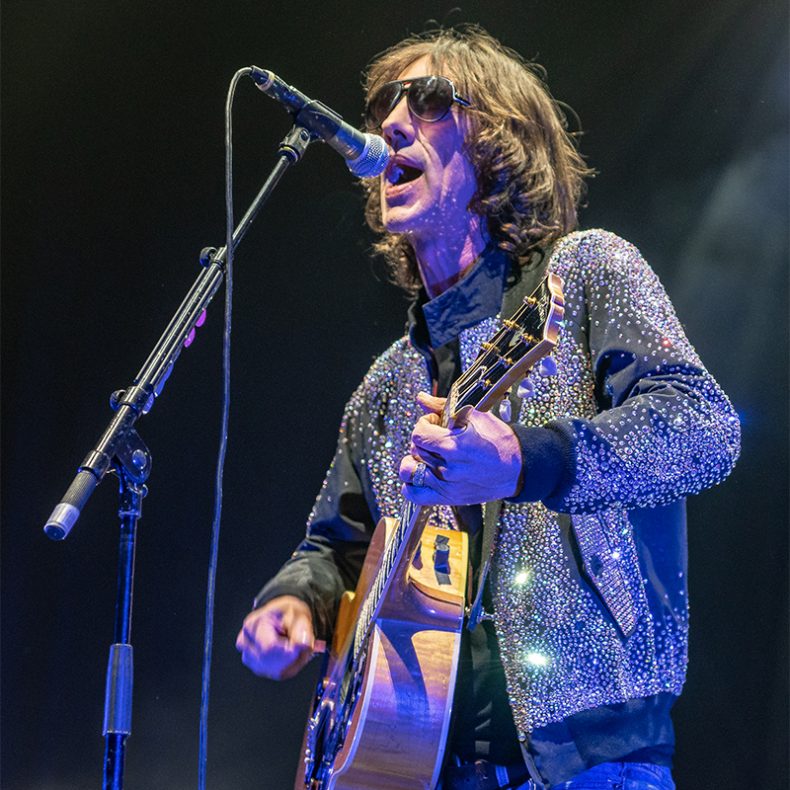 Richard Ashcroft released his new album Acoustic Hymns Vol. 1 on October 29 via RPA / BMG. It features 12 newly-recorded acoustic versions of classic songs from his back catalogue, spanning both his solo career and his time with The Verve. To mark the album’s release he was doing a short tour billed as “An Acoustic Evening Of His Classic Songs”’, performing tonight at M&S Bank Arena in Liverpool.

At its capacity of 11,000 it was almost sold-out a few days before Halloween, with not one costume or mask in sight. Arriving in good time to witness the support act(s) as I always do I was disappointed that for this evening’s show that role was just to be fulfilled by a DJ .That is no substitute for live music, in my personal opinion, though he appeared to do an adequate job for warming up my fellow gig-goers on an extremely cold evening by the Liverpool docks.

Enhanced by additional musicians, the classic anthems of a generation appear to have been given a new lease on life in terms of polishing their individual qualities. Switching between songs from his solo career and Verve songs, there are certainly no surprises in terms of the setlist. Indeed even the t-shirt that I bought pre-show actually lists the tracks from the album that will be  played. After a slightly delayed start, albeit brief when the song maestro actually didn’t have his guitar plugged in , he strums the recognisable first bars of “Sonnet” and the party is off and running. Despite being from another Northern city, the people of Liverpool willingly embrace Ashcroft as one of their own-football and all tribal rivalries easily cast aside on this occasion. A spiritual “Out Of My Body” and another Verve classic “Space And Time, ”and already the venue security are struggling to ensure that people remain in their seats.

Dipping back into his own solo back catalogue with “A Song For The Lovers “as the audience eagerly, passionately, and a little bit drunkenly joining Ashcroft’s vocal by belting out the song’s catchy tune straight back at him.

While there is widespread recognition for his solo gems, it’s the songs of The Verve and particularly anything from the iconic Urban Hymns album that generates the wildest audience response. Following tracks from that album, ”Weeping Willow” and “Velvet Morning”, the atmosphere erupts fully with the opening strummed chords of anthem “The Drugs Don’t Work” as the band is almost fully overwhelmed with the sheer power of the crowd’s singing. By this point, security have fully given up on ensuring that fans remain seated as they rush towards the aisles to sing, dance and shout loudly, as Ashcroft himself announces from the stage it truly appears that “Music is Power”

Triple encore brings the show to a close as the song that Ashcroft had returned to him by the Rolling Stones, “Bittersweet Symphony”, which rings out around the packed arena, joined by the voices of 11,000 people who have always known who this anthem truly belongs to.

Clearly a set of classic tunes, reworked and retweaked certainly, but in conclusion it was a fantastic night out.

I'm a 40 + music fan. Fond mostly of Rock and Metal my staple-musical food delights. Originally from Northern Ireland I am now based in the UK-Manchester. I have a hectic musical existence with regular shows and interviews. Been writing freelance for five years now with several international websites. Passionate about what I do I have been fortunate already to interview many of my all time musical heroes. My music passion was first created by seeing Status Quo at the tender age of 15. While I still am passionate about my Rock and Metal I have found that with age my taste has diversified so that now I am actually dipping into different musical genres and styles for the first time.
RELATED ARTICLES
acoustic hymns vol. 1live reviewliverpool

by SPILL NEWS on September 24, 2021
RICHARD ASHCROFT RELEASES THE NEW ACOUSTIC VERSION OF “THIS THING CALLED [...]