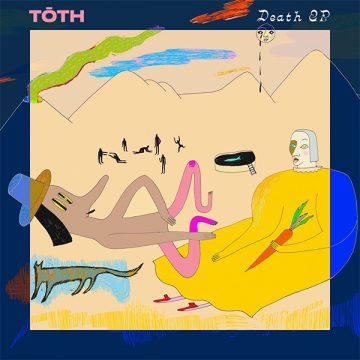 If you expect some cheerful music on a release that is titled Death, you just might stay away from the new 5-song EP by Brooklyn’s Alex Toth, who goes around just by his slightly modified last name, Tōth.

Tōth wrote these songs in these dark times, between 2019 and 2020, but besides the pandemic, there were very personal problems. A family member was dying from something Tōth himself was unfortunately familiar with – alcoholism.

“Muerto,” the lead-in track, tells it all.

“The lyrics, written in a combination of Spanish and English translate to, ‘I can’t sing because I’m dead’.” The song’s protagonist is making an appeal from the afterlife to someone who is alive, but unwell, encouraging them to not give up on this gift of life,” Tōth says.

Yet in such a heavy situation, Tōth sees all the life’s absurdities and tries to express them through music and lyrics. While songs like “Bluets” and “What Is Your Deal Man?” might on the surface sound like cheerful pop, digging into lyrics reveals all the vulnerabilities someone expresses when they are faced with mortality.

In all of it, Tōth points out the key point of his music here, that part of life is a gift too.

Formerly a lot of things, including a journalist and a translator, currently a freelance writer living in The Netherlands.
RELATED ARTICLES
album reviewalbum reviewsnorthern spy records
7.0