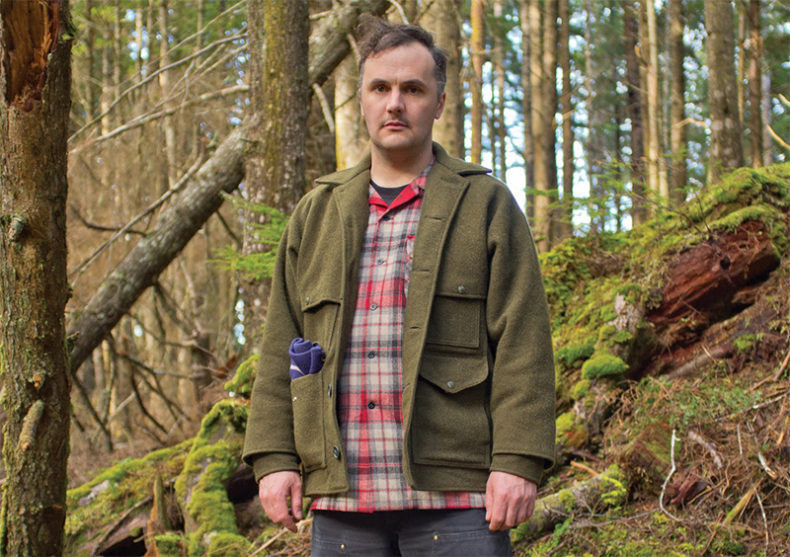 Mount Eerie is Phil Elverum. It has always been his project and his brainchild. Now, it is just him. On March 24, 2017 the eighth studio by Mount Eerie was released, called A Crow Looked At Me. It was, for all intents and purposes just a solo Phil Elverum album, and an extremely painful one at that. Elverum’s wife, Geneviève Castrée, passed away on July 9, 2016. They had been together for thirteen years and had a baby together and he was now a mourning husband and a single father.

To say A Crow Looked At Me is painful does not do the album justice, It is a brilliant, stunning, honest, raw art piece. I did not think that he would be able to tour this album. He did a show in January, but it seemed to be a one off appearance. But how could he perform any of these songs live?

Well, four months after the release of the album, he embarked on a tour, and it was that show he brought to Toronto on September 20, 2017. He played the Great Hall, a beautiful venue but not the perfect place for him for this show. Before I discuss the actual concert, I have to say standing for this type of honest performance took me by surprise and was not ideal. Even Elverum was taken aback commenting several times about the audience having to stand for the show. Small complaint maybe, but it was distracting from the show. As was the noise coming from the bar, which, again, Elverum commented on. At one point asking for everything to be turned up so he could drown out the noise.

The show itself was not a typical concert. This was a confessional and a disclosure from a pained individual. It was just Elverum and a guitar (and a little tree). He was honest, open and his sadness at times was difficult to watch. To see him crying during and after a song brought a whole new dimension to the songs and the lyrics. 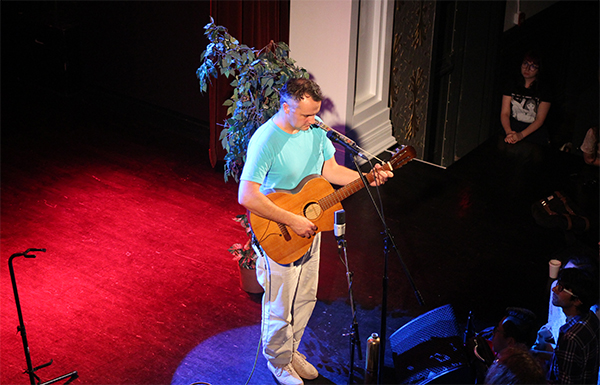 Much like Yoko Ono, who put Lennon’s bloodstained glasses on the cover of the first album she made after Lennon’s murder, Season of Glass (1981), or Sufjan Stevens’ Carrie and Lowell (about the death of his mother) this is an artist who is dealing with loss and the only way to cope with it is to do what he knows, art. It may not be everyone’s cup of tea or escapist entertainment, but for those willing to stick out, we were rewarded with a performance that I am sure people will refer to decades from now.

Artists do not usually appear so vulnerable and open in public. But Elverum is not your typical musician/artist. He apologized several times during the show for the sadness and intensity he was performing with, and he genuinely thanked the audience for being there, but the truth is it was our privilege to be part of this experience.

He performed half of the album A Crow Looked At Me, which was stunning. He also performed a few new songs which were a continuation of that album. They sounded stunning and flowed with the programme. He quietly introduced the songs as new songs, but said little else about them. He let the music and the songs speak for themselves. Not only an unusual thing for an artist who is promoting any album to do on tour but brave. But then, the night was about bravery.

To be honest, I do not know how he did this show, let alone a full tour. It is visibly affecting him, and yet he perseveres with the tour and each show. This is perhaps one of the most memorable performances I have witnessed. It was an unusual show and a moment in time to listen to one man deal with trauma. As a result, those paying attention understood the time because the show, like trauma, was relentless. He never let up. No moments of reprieve from the subject of his wife.

The night was about loss, he did not nor does he have any answers. He is expressing himself and to have the opportunity to see him do this live was one of those rare instances in life when you witnessed something truly important on stage. An unforgettable night, an unforgettable performance, an unforgettable artist. Elverum is a true genius who is brave enough to expose himself in this manner.

Born and raised in Whitby, Aaron discovered music through his love of The Beatles. This led to a career in radio, writing for various publications, and ultimately a radio show about The Beatles (Beatles Universe), which ran for over four years. When not immersed in music, Aaron enjoys spending time with the loves of his life -- his wife Andrea, and daughters Emily and Linda (all of whom have an intense love of music too).
RELATED ARTICLES
a crow looked at melive reviewmount eerie
9.0