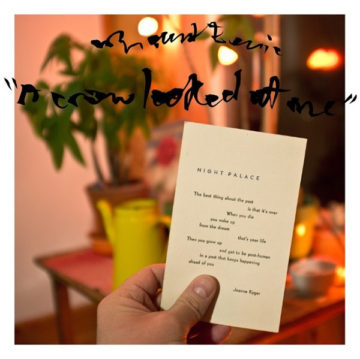 Mount Eerie is really songwriter and producer Phil Elverum.  Elverum was married to Canadian artist Geneviève Castrée, shortly after the birth of their daughter, Geneviève was diagnosed with inoperable pancreatic cancer.  She passed away on July 10, 2016.

“Death Is Real” is the name of the first single released from the album, it is also the a recurring phrase throughout the album, A Crow Looked At Me.  Instead of shying away from this incredible pain, Elverum addresses it head on.  I want to be clear, this is NOT an easy album to listen to, in fact, when listening to this album, he taps right into the marrow of loss, and leaves the listener reflecting on his (Elverum’s) pain and loss, but also reflect on any loss the listener has experienced.

Elverum recorded the album in the room his wife died in, playing all the instruments himself, all of which belonged to his wife, which can only bring him closer to her throughout the process.   The fact is the music is stunningly beautiful and the lyrics are probably the most powerful I have ever heard.  Other’s have written about death, but not in this way.  He is painfully honest, nothing romantic about death or loss, just pain and all that goes with it.  And like death itself, it is not resolved in the end, just the huge loss.

‘Did the people around me want to keep hearing about my dead wife, or does the room go silent when I mention you shining the light…I live with your absence…’he sings in “My Chasm”.  He addresses the discomfort of talking about and dealing about death, not only does he lose his wife but he is even more isolated from friends and his community.

It is interesting, then, that he would deal with the loss of his wife in such a public forum, for although this album is a work of art, it is still tackling a subject which is not usually openly address in public.  ‘Death is real…it’s not for singing about, it’s not for making into art’ he sings in the beginning of the opening track “Death Is Real”,  and yet Pedhil Elvrum does just that and he succeeds.

This is not a typical album and one that is very difficult to review, let alone talk about.  Raving about an album about a man dealing with the loss of his wife and their child’s mother seems odd.  Yet A Crow Looked At Me is a brilliant album.

Born and raised in Whitby, Aaron discovered music through his love of The Beatles. This led to a career in radio, writing for various publications, and ultimately a radio show about The Beatles (Beatles Universe), which ran for over four years. When not immersed in music, Aaron enjoys spending time with the loves of his life -- his wife Andrea, and daughters Emily and Linda (all of whom have an intense love of music too).
RELATED ARTICLES
a crow looked at mealbum reviewsmount eerie