Live Reviews
2
567
previous article
SPILL FEATURE: INTROSPECTION AND WHISKEY - AN INTERVIEW WITH JULIE DOIRON AND MIKE PETERS OF JULIE & THE WRONG GUYS
next article
SPILL ALBUM REVIEW: T.I. - US OR ELSE: LETTER TO THE SYSTEM 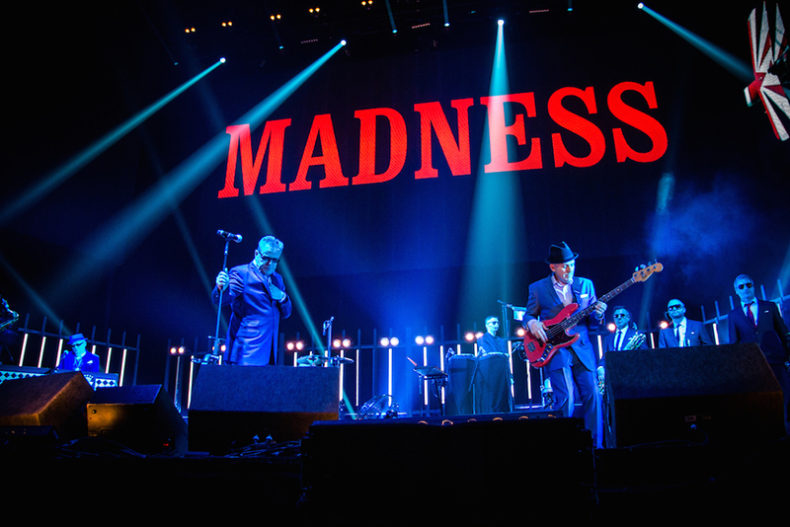 “Cant Touch Us Now” is what the tour has been termed, and it seems that there is just no stopping the British Ska legends. Continuing to tour regularly and unlike many other bands of their era still manage to release new albums. Madness and the musical genre of Ska/Two-Tone has always retained a soft spot in my musical affections. Ever since I started going to Rock shows in the eighties and buying albums I enjoyed listening to all the Two-Tone bands.

I was lucky enough to see Madness perform in Belfast on each of their last 3 UK December Tours. Fast forward a year and a different live venue location — the same iconic band remains. One thing that Madness cannot be accused of is being a heritage band. Each tour always includes a selection of material from their latest album.

On entering the Arena and being directed to our seats we were quite surprised by our positioning which presented a different side view of the stage behind one of the stage video screens. Support band The Lightning Seeds ran through essentially a ‘greatest hits’ set which sounded great and actively engaged a large portion of the crowd. It actually amazed me just how many hit singles the band had in their back catalogue. Unfortunately visibility-wise our options were very limited in viewing the larger proportion of the band members and the stage being obscured from our direct vision. The sound however was crystal clear as frontman Ian Brodie led his band members through a quite extensive support set in terms of its duration. It was unusual for a support slot in such a large, cavernous arena to have so many fans actually enter the venue early to witness and support the opening act.

Madness came on shortly after 9:00 PM and immediately my reservations were set aside. Utilizing a stage set structure of lighting and a see-through cage surrounding the musicians allowed our obscure seating vantage point to be nullified. Opening with the title track of their latest album it was clear when looking around the arena that many in attendance were not familiar with the song. This seems to be a common problem for bands of a certain vintage. Fans demand new music to prevent their faves from not becoming a heritage label act. On the other hand, when fans go to watch their musical heroes live, they only want to hear songs of their youth and nothing new. The Madness set list on this tour actually mixed things up from previous tours. The band played some of their rarely played songs and obscurities, such as “Cardiac Arrest” and “Yesterdays Men”.

Where most bands of a certain time period would see the crowd energy levels dipping when they played the newer numbers, there was no such problem with the almost capacity Manchester Arena crowd. Enthusiastic skanking from a packed floor spreading infectiously all around the seated tiers. The majority of the set list featured numbers that appeared to resonate with many from a different time and era — songs of their youth and happier times that caused people to dance the night away, casting off the shackles of modern life. The appeal of Madness is that they have a song catalogue that is timeless-enduring and possessing a quality of dance-ability.

In terms of delivering a smile and a solid evening of entertainment, dancing, singing and silly dances, Madness certainly tick all the boxes — each and every time.

I'm a 40 + music fan. Fond mostly of Rock and Metal my staple-musical food delights. Originally from Northern Ireland I am now based in the UK-Manchester. I have a hectic musical existence with regular shows and interviews. Been writing freelance for five years now with several international websites. Passionate about what I do I have been fortunate already to interview many of my all time musical heroes. My music passion was first created by seeing Status Quo at the tender age of 15. While I still am passionate about my Rock and Metal I have found that with age my taste has diversified so that now I am actually dipping into different musical genres and styles for the first time.
RELATED ARTICLES
can't touch us nowlive reviewmadness
7.0

by Samantha Stevens on October 28, 2016
Madness Can’t Touch Us Now Universal Music Fresh from the British Ska band Madness, which is known for its 1982 hit “Our House,” comes its latest album Can’t Touch Us Now, which [...]