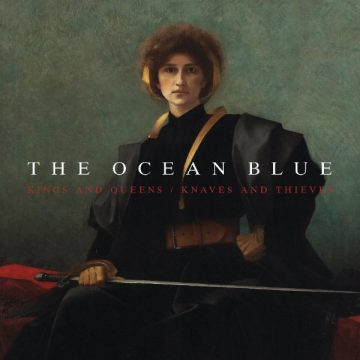 The Ocean Blue
Kings and Queens/Knaves and Thieves
Korda Records

The Ocean Blue, who started back in 1986 from all places Hershey Pennsylvania, has always fit perfectly in place with Dream / British pop legends. They stood on their own with mega college radio hits “Drifting and Falling” and “Between Something and Nothing”. There have always been comparisons to The Smiths, U2, R.E.M, as The Ocean Blue has covered some of their music in the early days. As well, lead singer David Schelzel sounds a lot like Bernard Sumner. The comparisons should end here as over the years, they have evolved, and in a way improved upon, their dreamy/jazzy/jangly sound. They now are a tight indie pop outfit. If one did not know their history, they would think that this is an unknown gem band whose songs are enjoyable on repeat. They still borrow from the greats on songs like “Therein Lies The Problem With My Life” (Very early Morrissey/The Smiths) and “All the Way Blue” which is like an Echo and the Bunnymen cover. It is hard not to make comparisons to a band that has embraced a movement thousands of miles away from them. The amazing thing is that these songs are fantastic. Two other huge standouts are “It Takes So Long” and “The Limit”. This album is so enjoyable and familiar it’s really comforting in a way only music can make you feel<.

Ex-pat living in Geneva, Switzerland from the hard streets of Baltimore, Maryland. Ex-radio-monkey and avid listener of all things that are supposed to be cool.
RELATED ARTICLES
album reviewalbum reviewskorda records
8.0