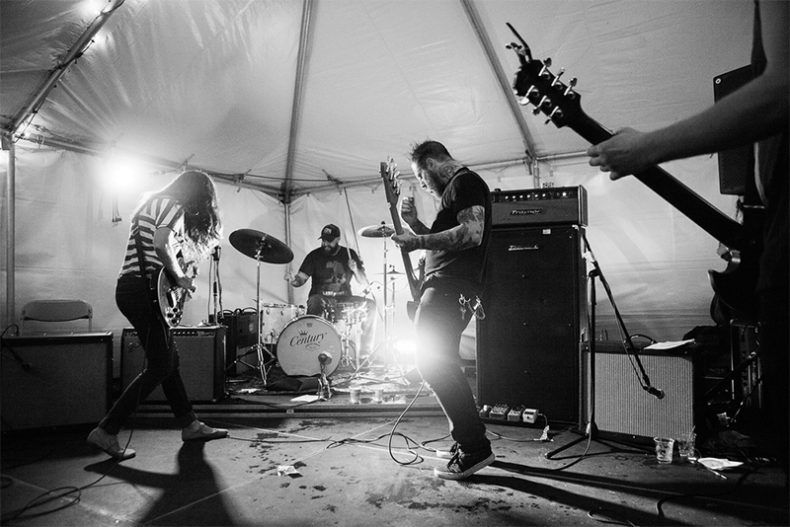 “I was invited to do a show at the Garrison, and I didn’t have a band”, Julie Doiron recalls during a recent telephone conversation. “A friend recommended Mike Peters, of Cancer Bats fame play drums.”

Mike remembers, at the time, “I did not know Julie’s music, I mean I knew Eric’s Trip (Julie was in the band from 1990 until 1996), but I didn’t know her own music.  So I got my friend, Jaye, to play bass.”  Jaye, of course, being Jaye Schwarzer, also of Cancer bats.  Eamon McGrath, an old friend of Julie’s added guitar.

And in 2012, Julie and The Wrong Guys were born.  It took four years for the band to officially get together to record their debut album (due out in early 2017) and their single “Homeless” paired with “Farther From You”.

The brilliant name of the band comes from an older Julie Doiron album (Woke Myself Up, 2007), and a song called “The Wrong Guy”.  As Mike explains, “we thought it was funny, a bunch of punks backing her up.  Sure she helped create punk rock in Canada as a member of Eric’s Trip, but as a solo artist, she is known for her quiet music.”  For the record, Julie likes the name, but would prefer to have her name dropped and just call the band The Wrong Guys.  For the record, it is a wise choice to keep her name as the Julie and The Wrong Guys just fits their sound. 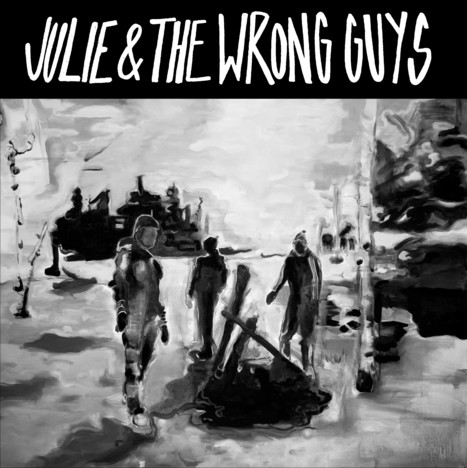 According to Mike, during the four years the band played together a few times, but “Cancer Bats were super busy, Julie had a daughter and we could play shows when we could.  Getting together was difficult.”  The band was also spread out across Canada. Eamon and Jaye live in Toronto, Mike moved to Winnipeg, and Julie in New Brunswick.  Yet the band kept in touch and the end result, a new album and a mini winter tour.  As Mike says, “it was fun every time we played together, the band just clicked.”

The group got together in Winnipeg in October at a cottage outside of Winnipeg.  According to Julie “most of the music was already written and I wrote the lyrics”.  She also contributed to the music, as according to Mike, “it was a raging cottage”.

Even though the cottage was “raging” and “rocking”. Julie found the driving force for her with this album was introspection.  “Being out at a cottage, surrounded by trees, lake it fit as I have been learning a lot about what our true nature is.  For me the album has a sound of going home.”

For Mike, the driving force was, “alcohol, mostly whiskey”.  Seriously, for him it was working with “incredible musicians with a strong work ethic, and hearing Julie’s mind blowing lyrics.”  It also gave all the members to play different kinds of music and experiment with different instruments.  Playing quiet music was something new to The Wrong Guys, and Julie shredding with the best of them was her revisiting a music form from the past.

Look out for their album coming out in the new year, and keep your eyes open for their mini tour.  With any luck they will play near you, me I cannot wait to catch them live and dig into their new album.

By the way, check out the brilliant picture sleeve (above) for their single, designed and painted by Mike’s sister, artist Jill McGillivray.

Born and raised in Whitby, Aaron discovered music through his love of The Beatles. This led to a career in radio, writing for various publications, and ultimately a radio show about The Beatles (Beatles Universe), which ran for over four years. When not immersed in music, Aaron enjoys spending time with the loves of his life -- his wife Andrea, and daughters Emily and Linda (all of whom have an intense love of music too).
RELATED ARTICLES
cancer batsfeaturesjulie & the wrong guys
7.0