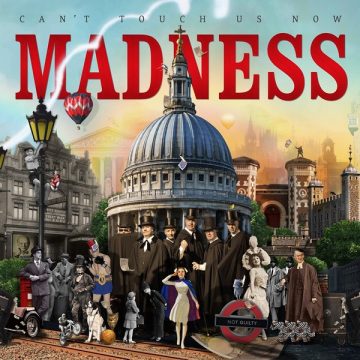 Fresh from the British Ska band Madness, which is known for its 1982 hit “Our House,” comes its latest album Can’t Touch Us Now, which was released on October 28. The whopping 16-track album is full of the quirky Ska sounds and lighthearted lyrics that made Madness famous. Produced by Clive Langer and Grammy winner Liam Watson, the album was recorded at the famous East London studio Toe Rag Studios. Recorded in only three weeks, Can’t Touch Us Now is the band’s followup to its 2012 album Oui Oui Si Si Ja Ja Da Da.

While the music on the album is primarily considered Ska, there are also subtle influences of Pop, Jazz, Reggae, and Soul. The title track “Can’t Touch Us Now” opens the album perfectly. Beginning with a distorted synthesizer, the sound slowly crescendos and the beat builds from there. A good portion of the song is instrumental and there is almost an upbeat Jazz feel to it. The lyrics are fairly simple but with an undeniable attitude and cheek.

“Mr. Apples” is an undeniably fun song. Although the sound is similar to “Can’t Touch Us Now,” the beat is more prominent. The singing also harmonizes better with music in this track. All of this combined makes for a very entertaining song that seems like it would be more at home being played in a pub.

“Blackbird,” which references Amy Winehouse, is an interesting song that combines street sounds, spoken tracks, and the grand-band Ska sound. The opening feels a bit like a noir film, but the music helps relieve any sense of melodrama. The allusion to Amy Winehouse is fairly obvious but doesn’t detract from the song at all. All of the above-mentioned elements and the impressive saxophone solo make for a rather enjoyable song.

Each song on the 16-album track features something distinct, a little quirk that sets it apart from the others. Overall, Madness’ Can’t Touch Us Now is a fun ride full of humour, distinct themes, and thoughtful allusions. The perfect album to mark this legendary band’s move into the future of music.

Samantha “Sam” Stevens is half a music journalist, and half an academic scholar. With a graduate diploma and MA in Journalism, Sam has covered musicians all over the world and her work has appeared in Guitar Girl magazine, North Bay Nugget newspaper, The Link newspaper, and a few others. She even founded and managed her own music blog The Littlest Voice for 5 years, in which the spotlight was thrown on new and emerging indie artists around the globe. Currently, Sam is a PhD student at Carleton University in the School of Indigenous and Canadian studies where she is continuing her MA research on colonial language in Canadian news and government institutions.
RELATED ARTICLES
album reviewscan't touch us nowmadness