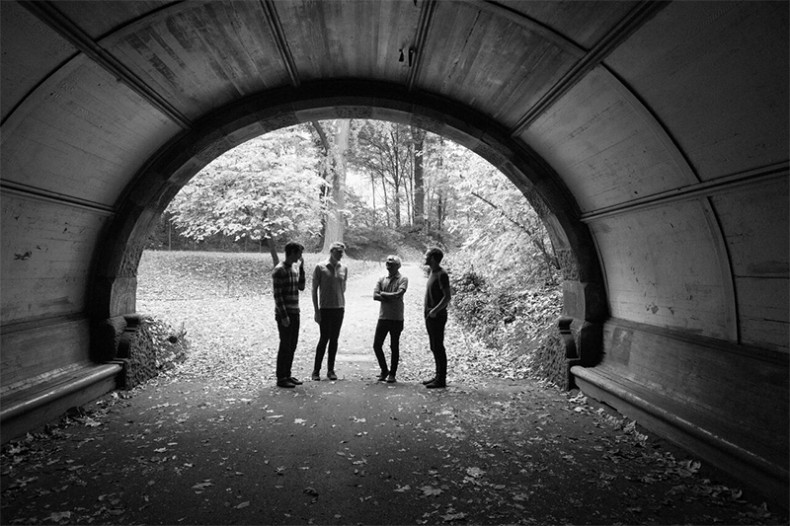 Hamilton’s Hess Village is a bit of a toss up depending on your mood, age and your tolerance for newly minted post-secondary alcoholics. In the heart of Hess is The Casbah. An ‘80s-themed mural, old draught taps screwed into the ceiling and some spillover from the aforementioned booze-addled academic crowd populate the Casbah. And fortunately last night, so did Odonis Odonis and Greys.

The local openers GREY//WATER and The Great Machine proved to be good padding for the insanity that followed them. Aside from their unnecessarily punctuated named, GREY//WATER were delightful. The Burlington quintet mixed elements of post-Rock, Shoegaze and that funny little saxophone jingle from a commercial (I think) and gently placed vocalist Charlotte Lee’s breathy, weightless soprano on top. The Great Machine is an adequate, meat-and-potatoes punk rock band, and despite some guitar malfunctions, put on a good show that kept the energy moving.

After the opening acts wrapped up, the room slowly filled with several lights, smoke machines, laptops, MIDI controllers and ostensibly anything else Odonis Odonis could steal from Long & McQuade’s rental section. For the next 45 minutes, the room seemed to expand and contract with every B-horror synthesizer, trudging bassline and insatiable yelp coming out of vocalist Dean Tzenos’ mouth. This band was relentless.

Odonis Odonis lives in a world where EDM artists like Skrillex and Calvin Harris grew up on The Jesus Lizard and Suicide. Where instead of being gifted with turntables and Aphex Twin records for Christmas, they had to make do with Stratocasters and effects pedals. The self-stylized industrial post-gaze outfit envisions electronic music through the grimy, clogged filter of punk, and it does a remarkable job of it.

After the smoke cleared, Greys began setting up the stage for a different kind of madness. As a fan of the band, and one that’s seen them live about a half a dozen times, I have a certain set of expectations. And with every new release, every new trick, those expectations are surpassed.

Upon hearing the first two singles off of Greys’ new record, Outer Heaven, I was skeptical. Sure, it was nice to see one of my favourite bands grow into something more nuanced, more mature, but why isn’t he yelling at me anymore? I missed the yelling. Then I got to see Greys perform these songs live. Vocalist Shehzaad Jiwani opened the set with “No Star,” the first single off Outer Heaven, a song about the anxieties that came with being a visible minority in the wake of the terrorist attack at The Bataclan in Paris last fall. And the yelling was there. Not in the same conventional way, and not in the tough-guy hardcore way. Jiwani’s vocals soared over the discordant guitars, imploring, challenging and empathizing with his audience. Greys have graduated from the conductors of unhinged chaos on If Anything into hardened, militant veterans of noise. The band steamrolled through their set as if they weren’t allowed to be there in the first place, and they had to get out before they were caught. Hulking bassist Colin Gillespie swung his guitar around as if a tiny David was trying to take him down with his slingshot, drummer Braeden Craig was tempered, tight and vibrant and guitarist Cam Graham peppered in ruthless feedback and bleep bloop guitar leads that would make Josh Homme blush. To say that Greys are on a roll would be fitting, but at this juncture, it’s starting to look a lot more like a march.

Marko Woloshyn is a Mississauga-based writer and musician. He owns a limited edition repressing of Mclusky Do Dallas and one time at a concert a drunk woman told him he looked like Keira Knightley.
RELATED ARTICLES
greyshamiltonlive review
6.0