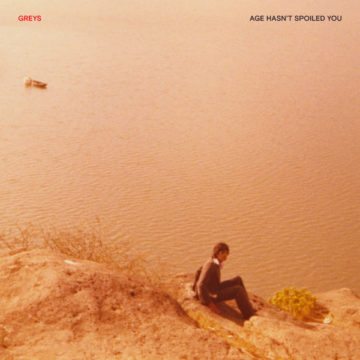 Album number three for Toronto-based Greys. They are a four-piece comprised of Colin Gillespie (bass), Braedon Craig (drums), Shehzaad Jiwani (guitar/vocals) and Cam Graham (guitar). For Age Hasn’t Spoiled You the band has listed many different influences and inspirations and I for one hear all of that and more in the album.

The music is a combination of many things, but in the heart of the music is a noise/rock band with pop undertones. Think Sonic Youth covering Madonna (I know, it is one of their albums).

And therein lies the problem with Age Hasn’t Spoiled You, it just is not original. “Shelley Duvall In 3 Women” sounds like an outtake from the first New Order album (Monument) while other songs lean heavily on Nirvana, Sonic Youth, The Cure and Eno. The issue is, those artists did it first and better.

That is not to say the album is bad, because it is not. These guys can play and the production is excellent. They do introduce many other elements, such as tapes, keyboards, loops, and other sounds which makes the entire affair interesting. They know how to write, and can turn a phrase. What they need to do now is find their own voice. When they do create their own sound, they are quite good. In fact, the album kicks off two brilliant songs, “A-440” and “Arc Light”. Sadly they are not able to keep up that momentum throughout the whole album.

Greys are four very talented guys and they have great potential. They keep expanding and growing and will eventually be able to turn the influences into their own distinct sound. Fans will, no doubt, enjoy this album. It is well put together, with a great front sleeve.

Born and raised in Whitby, Aaron discovered music through his love of The Beatles. This led to a career in radio, writing for various publications, and ultimately a radio show about The Beatles (Beatles Universe), which ran for over four years. When not immersed in music, Aaron enjoys spending time with the loves of his life -- his wife Andrea, and daughters Emily and Linda (all of whom have an intense love of music too).
RELATED ARTICLES
album reviewalbum reviewscarpark records
8.0