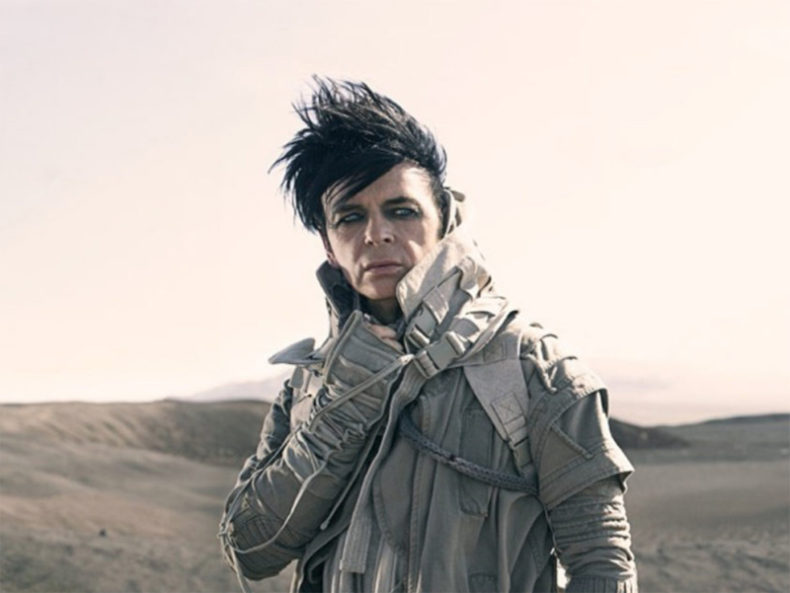 With eager anticipation Numanoids gathered in bars surrounding Manchester Academy and by 6 o’clock there was already a healthy queue forming outside, the buzz with Savage and the pending gig emanating throughout various conversations. Earlier on social media fans posted that the gig had sold out and it was quickly evident that was the case. As you walked into the venue members of the Soi Dog Foundation collect donations – Numan being a firm supporter of the foundation. Once past security fans gathered at the bar, the place now had a vibrant buzz of expectation. Close to the time everyone expects Gary to enter the stage the venue was full, and eager shouts of the prolonged Numan chant echoed around in the hope of encouraging his appearance maybe a little earlier.

A wall of white light emerged with the smoky stage atmosphere, the expected synth intro only Numan can produce raises tempo gradually then booms as lights flicker, shadows walk across the stage into position as the light breaks and reveals a bank of screens at the rear of the stage. “Ghost Nation” was the opener and first track off the Savage album with the lighting tamed until Numan blasts into the chorus, the tone is set Numan is on his game and with rapturous applause the stage turns red as he launches into “Metal”, his hands in the air clapping the crowd follows, the lights complimenting both every note and move and with the seemingly endless phones in the air recording and taking pictures Metal ends. “The Fall” and “Remind me to Smile” follow and end all too quickly before Savage returns with “Bed of Thorns”. Numan, always looking to the future rather than the past with his material continues to mix it up with “Splinter” and the “Down in the Park” clearly enjoying himself as Steve and Tim weave in and out with their usual flair brandishing their guitar and base fueling the stage with their own now familiar energy. The relentless pace continues, his energetic mood flowing with each and every track then, “My Name is Ruin” as he edges towards the chorus the bank of screens flicker with images of Persia, his daughter providing backing vocals, as he looks at the screen you can sense his chest expand with pride. The intro to “Cars” thrusts out, fresh subtly reworked to fit the set, “A Prayer for the Unborn” completes the set and as he walks from the stage waving the audience erupts with traditional applause knowing that’s not the end of the night. The stage draped in a blue haze as chants of Numan, whistles and the increased pace and noise of clapping hands usher Numan back “I Die you Die” with the customary hand gestures followed by “Are Friends Electric” as fans throw their arms in AFE style and chant as the stage lights now show off, “you see this means everything to me” the expected change in lyrics as the synthesizers thrash out the last few notes.

The audience Basking in Numan glory, knowledgeable with now varying age groups, sons and daughters of fans  who have traveled the now almost 40 years and the new bring the venue and gig to a thundering climax. This is Numan – this was the pleasure principle.

The Spill Magazine is a Toronto-based online publication dedicated to covering the independent music scene with a strong focus on our thriving hometown talent. Our writers bring you up-to-date news, in-depth features on musicians and reviews for the latest CD releases. We also travel to the front lines for all local festivals including Canadian Music Week and North by Northeast.Don’t forget to check out our Facebook and Twitter pages for all daily Spill updates.
RELATED ARTICLES
gary numanlive reviewmanchester