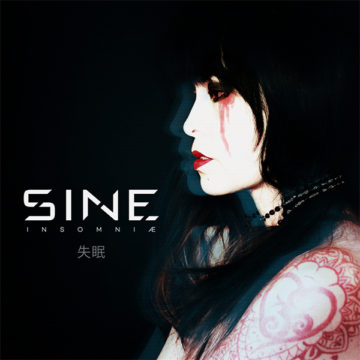 SINE is a band, founded by drummer and vocalist Rona Rougeheart. In the press release for the debut album, INSOMNIÆ, she is quoted as saying she “wanted our debut album to be dark, sexy & stylish, with sophisticated, edgy lyrical content.” She succeeds on all fronts. INSOMNIÆ literally leaps out at you as soon as you press play. This is hard electro beat, combined with heavy industrial and solid dance beats, and to top it off, some very fine lyrics exploring the darker side of humanity.

Rougeheart is no stranger to the music scene, having played drums in the band Dead Love Club. Here she branches out on her own, but she has had some help with INSOMNIÆ , starting with engineer, Charles Godfrey (Yeah Yeah Yeahs, Cody Jinks, Of Montreal) who has a great deal of experience, and brings a balance to the overall sound of the album. Also featured here is a brilliant duet with Curse Mackey (Pigface) on the song “Drugs”.

This is a great album, full of energy, anger, sound, and creative production. It is hard to believe that this is a debut album, as it sounds like she has been doing this for years. It is not polished nor is it rough. It has the perfect balance, electro Beat, with a punk attitude, and that is a wonderful sound to hear. The songs grab you and do not let you go until the album is over. It is never boring.

Rougeheart sings with conviction, and the end result is a stunning album that is thought-provoking, while it would be at home in a dance club. The songs look at love, betrayal, addictions, and all points in between, but always in an honest, open, and respectful manner. It mirrors the times without exploitation.

INSOMNIÆ is an impressive debut by a very impressive artist. Extremely well done!

Born and raised in Whitby, Aaron discovered music through his love of The Beatles. This led to a career in radio, writing for various publications, and ultimately a radio show about The Beatles (Beatles Universe), which ran for over four years. When not immersed in music, Aaron enjoys spending time with the loves of his life -- his wife Andrea, and daughters Emily and Linda (all of whom have an intense love of music too).
RELATED ARTICLES
album reviewalbum reviewsrona rougeheart
8.0