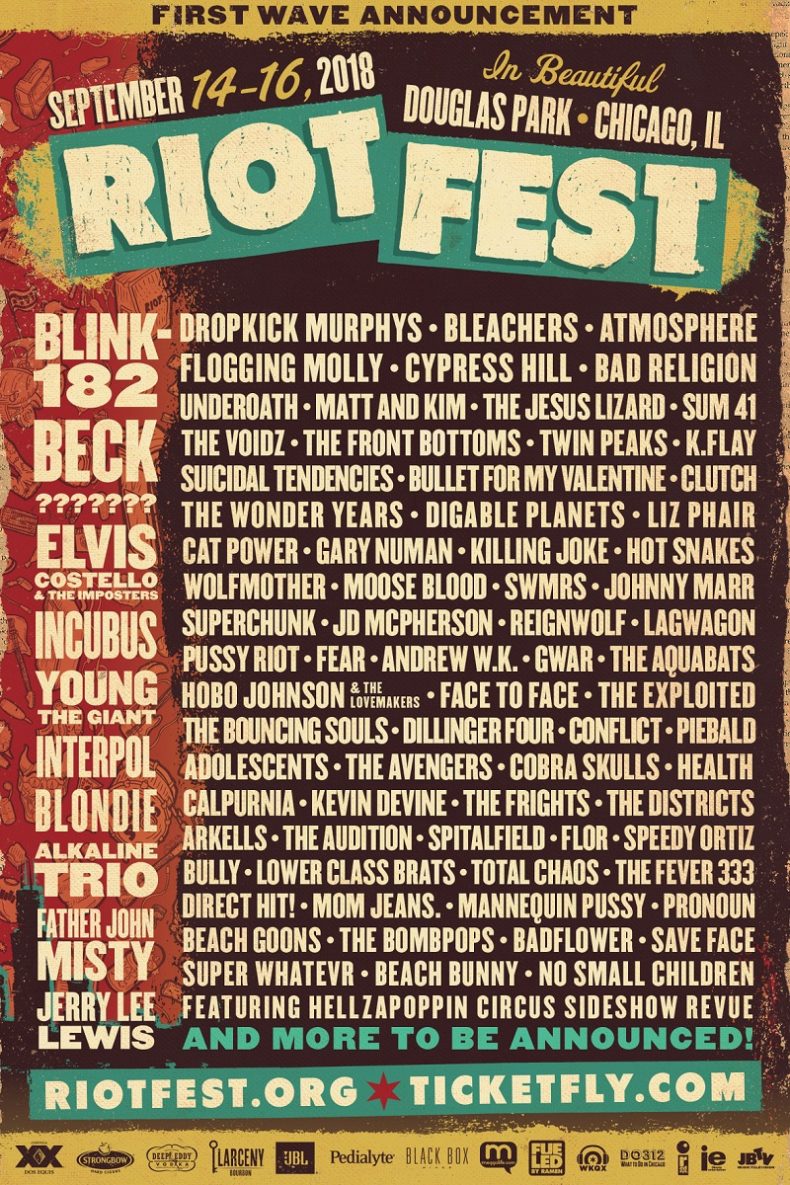 Every year, music fans from around the world anticipate who’ll be playing at Riot Fest, the Chicago festival made famous for diverse, innovative lineups, set amongst a fan-friendly three-day celebration of punk, rock ‘n’ roll, hip-hop, metal, indie rock, roots music, and just about everything in between.

Now in its 14th year, Riot Fest has continued its tradition of being left of the dial, defying the homogeneity seen in many festivals. 2018 brings a cavalcade of incredible artists across five stages in historic Douglas Park. Announced headliners include Blink-182 and Beck (with a third to be revealed during Riot Fest’s second wave lineup announcement, coming in a few weeks). From legends such as Jerry Lee Lewis and Elvis Costello, to from the socially-conscious rhymes of Atmosphere, to the mainstream rock sounds of Young the Giant, there is truly something for every music lover.

Other notable Riot Fest 2018 bookings include Incubus, Blondie, Interpol, and the return of Russian rabble-rousers Pussy Riot (performing a few years after hosting a truly gripping panel on music and protest with Henry Rollins at Riot Fest 2014). Father John Misty makes his debut at the fest, along with the Jesus Lizard, Gary Numan, and Liz Phair. Pop culture fans will be interested in checking out the first ever Chicago show from Calpurnia (featuring Finn Wolfhard from Netflix’s Stranger Things and the 2017 horror flick, It), as well as family-friendly caped crusaders the Aquabats. In addition, Digable Planets and Cypress Hill are bringing the beats. At the core of it all, the punk rock foundation on which Riot Fest was founded is represented; from classic bands like Fear, Adolescents, Total Chaos, Bad Religion, and the Exploited to the generation of groups they inspired, repped by Sum 41, Alkaline Trio, Underoath, Dillinger Four, and so many more. Mind you, this is merely the first wave of bands; more headliners and other artists will be revealed in due time… and as usual, there will be performances of iconic full albums to be announced shortly.

Riot Fest takes place September 14, 15, and 16 in Chicago’s historic Douglas Park, a large and beautiful oasis set against the backdrop of the Windy City’s glorious skyline.

Riot Fest 2018 3-day passes are on sale now, available in General Admission and three tiers of upgraded VIP options. All passes can be purchased via the following links:
Bit.ly/RF18-Tickets
RiotFest.org/Tickets
Riot Fest also offers a layaway program for fans to pay off their tickets incrementally during the months leading up to the festival.

SPILL NEWS strives to keep our readers up to date with news and events in the music industry. We keep you informed of the most recent information regarding new releases, tour dates, and information items about your favourite artists.
RELATED ARTICLES
arkellsbad religionbeck