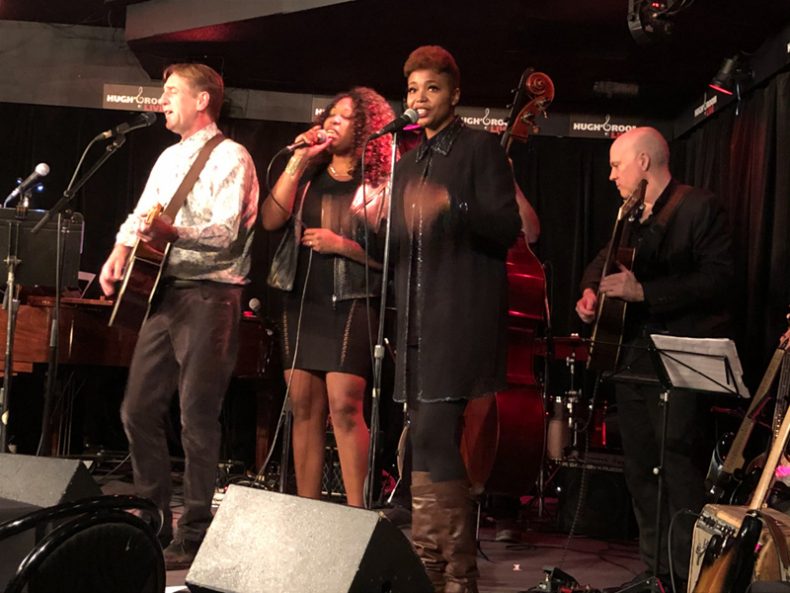 Famed Toronto venue Hugh’s Room played host to Fergus Hambleton as he launched his new album, Neighbourhoods. The evening was full of music, family, good friends and more than a few surprises. It may be the kind of concert where you might hear attendees say the age old phrase “you should have been there!”

The show opened with a spirited set from WOOD AND WATER, a trio made up of Hambleton, Hermina George and Trish Campbell. It is not every artist who can open for himself, but WOOD AND WATER did an admirable job. It allowed both George and Campbell to spotlight their strong vocals and present music they have written. It was also a chance for Hambleton to play some of his favorites, which included covers of Champagne and Bob Marley, as well as some Satellites material. With the amazing George Koller on standup bass, they were a tight unit, and they did an excellent job warming the audience up for the main feature.

WOOD AND WATER also set the pace for guests. Joining the band for one song was Don Stevenson of Moby Grape. Credit also has to be given to the fantastic band with them on stage, including the previously mentioned Koller, Julie Long on piano,  and Tom Bovaconti on guitar. 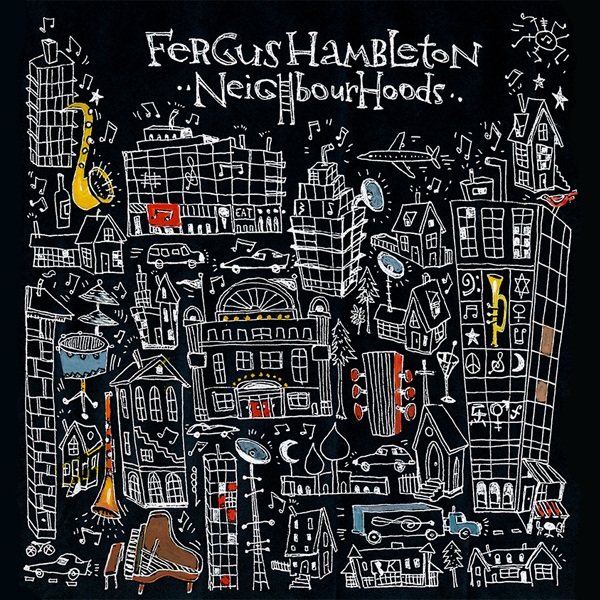 After a short break, the band reassembled on stage, joined by Kevin Adamson on keyboards, Tony Rabalao on drums,  and the very amazing guitarist Eric St. Laurent. Hambleton played guitar throughout and he provided brilliant vocals. He was also the perfect host, complete with a riddle contest, funny, off the cuff remarks, and extremely humble introductions. He was the consummate performer and host for the evening.

The second half featured his entire new album, Neighbourhoods. He told stories prior to each song which not only added context, but also made the evening poignant with songs about absent friends (“Slow Fade Into Black”) and the past (“I Want You Now”). But through it all was the music. At one point, with the addition of a horn section, Hambleton managed to fit 11 people on the stage. For those who have been to Hugh’s Room, this is no easy task.

Neil Chapman, guitarist extraordinaire and former member of Pukka Orchestra, made a guest appearance on “Life On My Own”. This added to the celebratory nature of the evening and just sounded amazing.

The show was a wonderful way to launch an album and a wonderful night. Hambleton puts on an excellent show full of energy, fun, and a very close and comfy atmosphere. Just a magnificent night.

Born and raised in Whitby, Aaron discovered music through his love of The Beatles. This led to a career in radio, writing for various publications, and ultimately a radio show about The Beatles (Beatles Universe), which ran for over four years. When not immersed in music, Aaron enjoys spending time with the loves of his life -- his wife Andrea, and daughters Emily and Linda (all of whom have an intense love of music too).
RELATED ARTICLES
current recordsfergus hambletonhugh's room

by SPILL NEW MUSIC on October 27, 2019
FERGUS HAMBLETON – “WALKING IN A STORM” A SPILL EXCLUSIVE MUSIC PREMIERE The new single from singer/songwriter/multi-instrumentalist Fergus [...]